AbeBooks has posted an email advertisement displaying what the company calls "50 Iconic Book Covers." I do recognize some of the covers from libraries and thought I'd share with you. 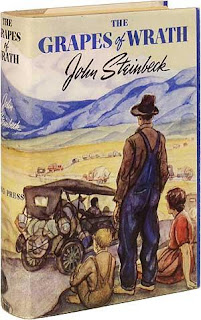 First edition. A tiny bit of foxing to the topedge, easily fine in fine dustwrapper. A crisp, fresh, bright and magnificent copy of this Pulitzer Prize-winning classic of an Oklahoma family's migration to California during the Depression. Basis for the John Ford film featuring Henry Fonda as Tom Joad. Ford and Supporting Actress Jane Darwell won Academy Awards; Fonda was nominated but lost to Robert Donat in Goodbye, Mr. Chips! Steinbeck's masterpiece and literature's lasting testament to the Great Depression, it was singled-out in his citation for the Nobel Prize decades later.
The price? $22,500. 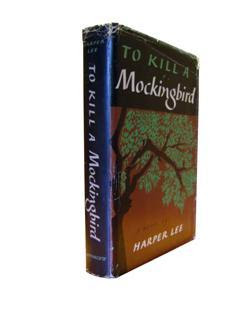 First Edition of the author's only novel; one which garnered her the Pulitzer Prize. Octavo, original green cloth backed brown boards, titles to spine in gilt. Near fine in a very good dust jacket. Signed by the author on the front endpage. The first edition had an estimated printing run of 5,000 copies.
Price = $27,500. 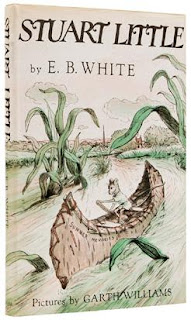 First edition, first printing, in first issue dust jacket with "Harper & Brothers" to foot of front flap. Inscribed on bookplate to pastedown by the author "For Carl William Hull, with my best -, E. B. White". Octavo. Original beige cloth, titles and illustrtion to front cover in green and orange, pictorial endpapers. With the colour printed dust jacket. Housed in a quarter green morocco solander box by the Chelsea bindery. Frontispiece and text illustrations by Garth Williams.
Price = $18,563.83. 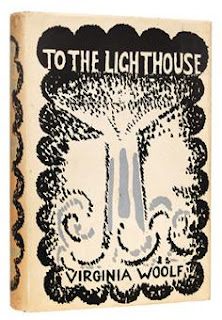 First Edition, First Impression of one of the undisputed masterpieces of the modernist movement. "On the publication day of this great novel, its author drooped under ‘the damp cloud’ of a review in the Times Literary Supplement, ‘timid’, ‘doubting’, a replica of its reviews of her previous two novels (Diary, 5 May 1927). Yet a month later she began to find herself ‘almost an established figure They don't laugh at me any longer’, she noted in her diary on 6 June. ‘Possibly I shall be a celebrated writer.’"
Price = $33,414.90. 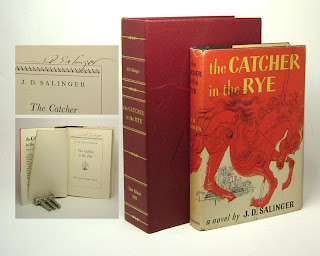 A fine SIGNED copy of the March, 1952 reprint of the first edition. [The first issue was July, 1951]. 8vo., 277pp., black cloth, gilt.Salinger's remarkable first book, neatly signed in black fountain pen at the top of the title page. An excellent example of Salinger's elusive signature - The binding is fine; the dustwrapper very good or better with the $3.00 price present & nine reviews on the back panel replacing Salinger's photo after the first few early printings at his insistence. Custom clamshell case in very fine condition. The probable High Spot in Modern American Lit collecting, "The Catcher In The Rye is undoubtedly a 20th-century classic. It struck a popular note, particularly with young readers, who strongly identified with Holden Caulfield and his yearning for lost innocence. Salinger's novel was, and continues to be, a phenomenal success" (Parker, 300). "This novel is a key-work of the nineteen-fifties in that the theme of youthful rebellion is first adumbrated in it, though the hero, Holden Caulfield, is more a gentle voice of protest, unprevailing in the noise, than a militant world-changer. The Catcher in the Rye was a symptom of a need, after a ghastly war and during a ghastly pseudo-peace, for the young to raise a voice of protest against the failures of the adult world. The young used many voices-anger, contempt, self-pity-but the quietest, that of a decent perplexed American adolescent, proved the most telling" (Anthony Burgess, 99 Novels , 53-4).
Price = $55,000.

So, if you're looking for a summer read for yourself or a loved one--you know, something for your kid to read as you're driving to that favorite summer campground.... Oh, and by the way, you can get The Godfather, The Stand, The Sword in the Stone, or The Wizard of Earthsea, and others for only $4,000 - $5,000. What a deal!


Copyright 2010 by Thomas L. Kepler, all rights reserved
Book descriptions from the AbeBooks link
Posted by Tom Kepler at 7:47 PM