First of all, the truth: I am a teacher of the Transcendental Meditation Technique, and the material of this film was familiar to me. There was a personal connection to the sites and subject matter of Richard Beymer's film.


On October 9, David Lynch Following His Master's Footsteps had a special showing at Maharishi University of Management as a fund-raiser for Maharishi School for the Age of Enlightenment, Fairfield, Iowa.

Here is the blurb from the website Peacetown, USA:


In December 2009, David Lynch retraced Maharishi Mahesh Yogi’s travels across India in the years before Maharishi inaugurated his Spiritual Regeneration Movement in 1957. Richard Beymer’s stunning new documentary follows David up into the Himalayas, to Jyotir Math, where Maharishi spent much of 13 years with his teacher, Guru Dev; and to Uttar Kashi, where Maharishi spent two years in silence following the passing of Guru Dev in 1953. We go with David to Jabalpur, near the birthplace of Maharishi; and to Ramashram, Kanyakumari, and Trivendrum–all rare and special sites integral to the founding of Maharishi’s movement. Richard’s filmmaking is artful, magnificent, and captures the behind-the-scenes look and feel as David and his traveling buddy, Bob Roth, make their way with awe, humor, and dogged persistence to each new destination. See David Lynch at his best: wise, funny, insightful, and inspired.

Richard Beymer had a real challenge for this documentary--and it took two hours to do the job: 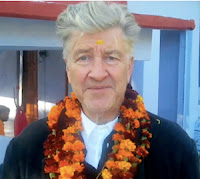 Before the backdrop of  Himalayan immensities; colorful villages and city streets; ashrams, holy sites, and temples--we see David Lynch awed and rapt in meditation, and then searching for a match for a cigarette. A unity of opposites, a contradiction of values, the universal smudged by the specific: David Lynch.


Richard Beymer's choice to include a three-dimensional portrait of Lynch is admirable--and was a task he accomplished with humor and tact. The great, beautiful glory of a painted, sculpted temple ceiling, or the simple pleasure of the travelers as they enjoyed a meager meal of cookies and Coca-Cola; birds singing in the limbs of trees outside an ashram, Bobby being duped to call hotel management about their non-existent spa; hairpin turns and a view of sea extending to infinity: life as Lynch is diverse, and this film captures that.

When David Lynch Follows His Master's Footsteps hits the theaters, try this work of saffron silk rather than blue velvet. If your experience is anything like mine, you will leave having made closer acquaintance with a unique land, a saintly life, and an artistic genius. You sort out the images with the honorifics. Just make sure you include Richard Beymer in your praise.


Copyright 2010 by Thomas L. Kepler, all rights reserved
Cisco and Pancho
Posted by Tom Kepler at 5:00 AM