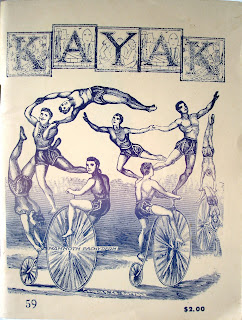 It was my senior year in college in 1973, and my poet friends and I were traveling from Davis, California, to Santa Cruz, where our mentor Karl Shapiro (1944 Pulitzer Prize winner for poetry) was giving a poetry reading.

What I remember most about the reading was three white-haired men: Karl Shapiro, William Everson, and George Hitchcock. Shapiro read, Everson and Hitchcock gave him a "Hail and well-met, good fellow," and we students stood back and respectfully gave the gentlemen some distance.

(My main memory of the evening, actually, was that I was falling in love with a young poet-friend named Katie--not that she ever realized that--I was rather flighty in those days.)

Years later, I did submit to kayak, Hitchcock's poetry magazine, and received a nice letter saying he was "hanging it up" and not printing more--but that he liked one of my poems and wished me luck with it elsewhere.

I never hob-nobbed much with poets such as these men--I was just a kid, really, who liked to write poetry and took it seriously--but men such as Shapiro, Everson, Hitchcock, and later Kenneth Rexroth, whom I met at a U.C. Davis poetry reading, were individuals who had dedicated their lives to words and literature. That impressed me mightily.

I look back now and see men who lived through huge events and did so with dignity.

Karl Shapiro was in the Pacific during World War II, in 1944 publishing V-Letter and Other Poems, which earned him the Pulitzer Prize. He is most famous (in my opinion) for being the "Bourgeois Poet," the everyman's poet.

William Everson was a Dominican monk for eighteen years, publishing under the name Brother Antoninus. Shapiro told the story of when Everson finally renounced his status of a monk. During a poetry reading, Antoninus made the decision, "and when he removed his crucifix, it hit the microphone, making this eerie ringing sound that echoed in the hall." Everson set type and printed unique copies of some of his books.


During the Oregon Shakespeare Festival in 1957, the House Un-American Activities Committee summoned him to testify in San Francisco, where he delivered what may well have been his finest performance.
When asked to state his profession, he answered: “I am a gardener. I do underground work on plants.” He then refused to answer questions about membership in the Communist Party, “on the grounds that this hearing is a big bore and waste of the public’s money.”

In his 59th issue of kayak magazine (out of an eventual 64 issues), Hitchcock wrote:


AS YOU WILL HAVE NOTICED, the cover price for a single issue of kayak is now gone to $2 -- our first raise in the 17 years of publication. Subscriptions will still be $5, but for one year of three issues. Certain other economies have been introduced as well, principally in typesetting. kayak remains one of the very few journals utterly unfunded by the NEA or any institution. It's a question of principle, and one which we hope you will support through your subscriptions . . .

The New York Times mentions this about Hitchcock's independent publishing:


Kayak operated outside the world of foundation grants and government support, although the National Endowment for the Arts, unsolicited, gave the magazine two grants. Mr. Hitchcock used most of the money to publish books by Mr. Simic, Carver, Carruth and others. He used $500 to create a prize for the best poem about Che Guevara.

As the world moves into the world of effortless, easy, instant publishing, I believe we should learn from those before us who lived independence and accepted the price of that. Along with the freedom to publish comes an equal responsibility. 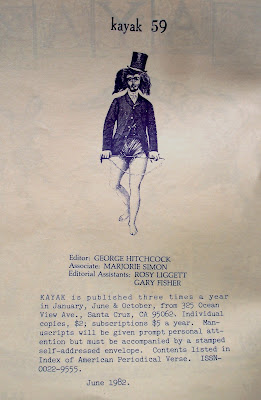 Copyright 2010 by Thomas L. Kepler, all rights reserved
Hitchcock image from the Santa Cruz Sentinel
Posted by Tom Kepler at 5:00 AM