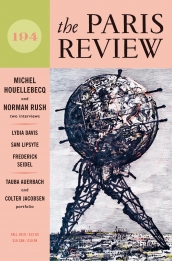 The Paris Review began publishing in 1953 with the aim "to emphasize creative work—fiction and poetry—not to the exclusion of criticism, but with the aim in mind of merely removing criticism from the dominating place it holds in most literary magazines and putting it pretty much where it belongs, i.e., somewhere near the back of the book" (from the About online page).

The list is truly staggering in its stellar comprehensiveness.


"All of us failed to match our dream of perfection. So I rate us on the basis of our splendid failure to do the impossible. In my opinion, if I could write all my work again, I am convinced that I would do it better, which is the healthiest condition for an artist."

"I'm a failed poet. Maybe every novelist wants to write poetry first, finds he can't, and then tries the short story, which is the most demanding form after poetry. And, failing at that, only then does he take up novel writing."


"I would gladly have traded what I have tried to say for what came off my tongue, naturally.  "


"I remember standing on a street corner with the black painter Beauford Delaney down in the Village, waiting for the light to change, and he pointed down and said, “Look.” I looked and all I saw was water. And he said, “Look again,” which I did, and I saw oil on the water and the city reflected in the puddle. It was a great revelation to me. I can’t explain it. He taught me how to see, and how to trust what I saw. Painters have often taught writers how to see. And once you’ve had that experience, you see differently."


"It’s myself . . . and my reader. I would be a liar, a hypocrite, or a fool—and I’m not any of those—to say that I don’t write for the reader. I do. But for the reader who hears, who really will work at it, going behind what I seem to say. So I write for myself and that reader who will pay the dues. There’s a phrase in West Africa, in Ghana; it’s called 'deep talk.' For instance, there’s a saying: 'The trouble for the thief is not how to steal the chief’s bugle but where to blow it.' Now, on the face of it, one understands that. But when you really think about it, it takes you deeper. In West Africa they call that 'deep talk.'”

The magazine also has close to fifty audio interviews online.

Copyright 2010 by Thomas L. Kepler, all rights reserved
Posted by Tom Kepler at 5:00 AM