Endangered Alphabets: a book, an exhibition, a vision 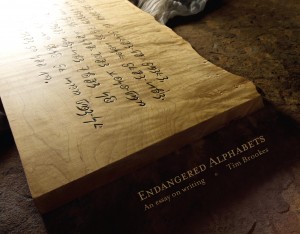 Cultural integrity is embodied in language, and here is a project that recognizes and celebrates that: the Endangered Alphabets Project, fathered by Tim Brookes.

Individual copies, signed and inscribed, can be purchased for $29.95 plus $2.50 for packing and mailing, the PayPal link available via the website links.

The Project's wonderful website explains itself, and I will use its words to introduce it.


The world has between 6,000 and 7,000 languages, but as many as half of them will be extinct by the end of this century.

Another and even more dramatic way in which this cultural diversity is shrinking concerns the alphabets in which those languages are written.

Writing has become so dominated by a small number of global cultures that those 6,000-7,000 languages are written in fewer than 100 alphabets. Moreover, at least a third of the world’s remaining alphabets are endangered–no longer taught in schools, no longer used for commerce or government, understood only by a few elders, restricted to a few monasteries or used only in ceremonial documents, magic spells, or secret love letters.

The Endangered Alphabets Project, an exhibition of carvings and a book, is the first-ever attempt to bring attention to this issue.

Endangered Alphabets, with an introduction by David Crystal, author of The Cambridge Encyclopedia of Language, is now a reality!

The goal of Endangered Alphabets, the book, is to act as a catalogue to the exhibition, but to go farther and raise questions about writing itself: how it develops, what it expresses beyond straightforward meaning, how it is being affected by all the rapid changes in technology.

In his Introduction to Endangered Alphabets, David Crystal writes:

"This is an unusual book, combining elements of linguistics, aesthetics, biography, and travelogue. The vocabularies of art and linguistic science become bedfellows, and each seems comfortable with the other. Its honest account of the trials and tribulations of a woodcarver will be a revelation to anyone who has not thought about how such things come to be. The dispassionate observation of a script, seen through the carver’s eye, adds a fresh dimension to our understanding of how a writing system emerges."

"The Blog" contains links to Brookes' articles on a variety on topics related to his project: language as magic, endangered languages/endangered cultures, and endangered "signage" (traffic signs that include an endangered language, such as Cherokee from the Gallery tab). One favorite is an article on new languages developing in India. 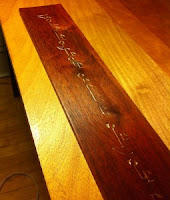 I think equally as fascinating as the Endangered Alphabets book is the fact that Tim Brookes is carving examples of these alphabets for the exhibition and for "signs" to be posted in libraries and various other sites. The article about carving letters on an exotic wood called "Padauk" (the slab bought for Brookes for his birthday by his daughter Zoe) is a wonderful record of the author and artist's love not only for language but also for wood.

Author Tim Brookes provides a number of videos on YouTube, one of which introduces the project and the others that discuss some of the endangered languages: Tifinagh, Balinese, Cherokee, and Baybayin. The videos are "home video" quality records of Brookes briefly describing endangered languages. Their charm consists of his passion and the interesting details he includes. I've included his introduction to the Endangered Alphabets Project below, but his short descriptions of individual languages on the other videos are more interesting, I think, available through Brookes' YouTube Channel.


Tim Brookes is also the head of the Champlain College writing program, a cutting-edge initiative that engages its students in actively using the most current technology to publish books. Endangered Alphabets: a fascinating website, a fascinating project, a fascinating book, created by a fascinating man.


Copyright 2010 by Thomas L. Kepler, all rights reserved.
Photo citations available on the Endangered Alphabets site and its linked pages
Posted by Tom Kepler at 5:00 AM