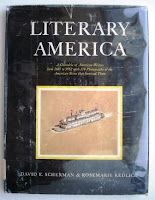 So I'm given this library book. I flip it open to the copyright page and see it was published the year of my birth--and has now been discarded by my school's library. There's a weird moment.

Literary America, it's called, and the front cover sub-text states: "A chronicle of American writers from 1607 to 1952 with 170 photographs of the American scene that inspired them"--compiled and written by David E. Scherman and Rosemarie Redlich (Redlich is a "redhaired Viennese" and Scherman a New Yorker, both of whom had worked for Life magazine).

But here are some other American writers of the 93 chosen in 1952 as significant: Artemus Ward, Lafeadio Heran, Hamlin Garland, Winston Churchill (not the Brit P.M.), Ellen Glasgow, John P. Marquand.

Either my education was shabby and my reading habits spotty, or a "contemporary" vision of who is going to pen the classics is a chancy affair. I admit there are holes in the fabric of my education, but I suspect the time-tested process of letting time winnow out the classics is best. 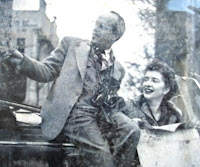 Of the 93 authors, I had never heard of sixteen. Perhaps when I read the sketches of the writers' lives, some spark of connection will fire--a book title, an event, a genre.

I intend to research and read more deeply. This is my chance to fill a few neglected corners of my education. Perhaps public domain ebooks through Project Gutenberg will yield unexpected treasures.


A tidbit chosen at random from the "unknowns": Frank Norris "is now generally credited" with bringing naturalism to the American writing scene. I have heard of his novel The Octopus, but to be honest, I thought it was one of Upton Sinclair's novels, along with Sinclair's muckraker The Jungle. Norris died at thirty-two years of age, his trilogy of "man in a struggle with social forces" only two thirds completed.

Learn something every day . . .

I might be coming back to this 1952 "chronicle of American writers" to learn a little more literary history and to ponder more on our assumptions of literary greatness.

I've made some personal connection with this book published the year of my birth. I think I'll keep it out of the "discard" pile a little longer.