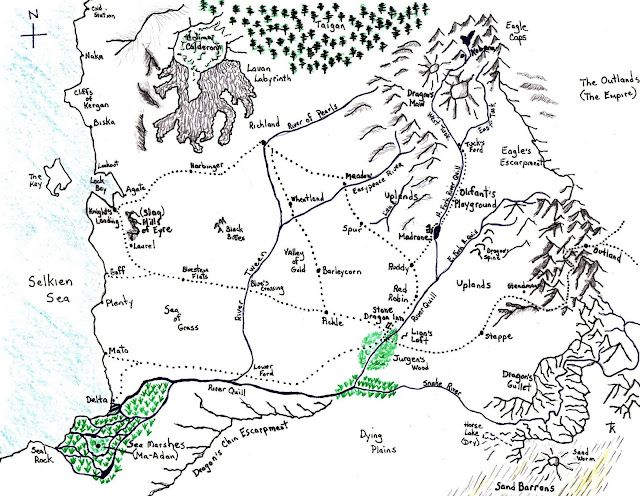 Here is the map that I began to draw as I was revising my fantasy novel The Stone Dragon.
I then added to the map as I was rewriting the sequel, Dragons of Blood and Stone. At some point, I said to myself, "I don't like all those blank places," and added in interesting names and possibilities, knowing that I could go back and tap the map as a resource at a later point.
A lot of intuition and deep behind-the-eyeballs faint trains of logic were involved. I could feel the story in the names and geographic locations but didn't pull that information out to inspect it.
At least, not until now.
I've written four short stories over the winter holiday and am now in the process of revising them. They are all set in the Dragons of Blood and Stone series fantasy reality, and they are all "filling in" the history of that reality.
These stories began with characters that I wanted to write about, but the setting provided specifics for conflict and helped me to increase the realism or "world-building" necessary for fantasy to to hook the reader. As I continue to write the stories, they will eventually become a collection: Tales of the Stone Dragon Inn.
I'm glad I've got a map because now I can go exploring--and so can anyone else who chooses to read my stories!
Copyright 2012 by Thomas L. Kepler, all rights reserved
Posted by Tom Kepler at 6:03 AM