My former student is grown up now. The last time I saw him was in the 7th grade. Now he's in the 10th grade, has started a blog for the books he's read, and has written an extended review of The Stone Dragon. 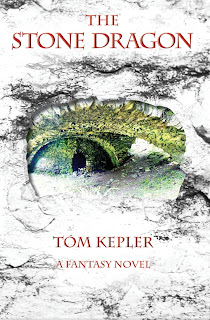 Here is the link to his blog--Sebastien Lacasse's Blog--and his review is added below.

Published in August was a book written by my former English teacher, Tom Kepler. Two years ago when I was living in the same town as him, I found out he was writing his own novel. Originally, I thought it was a research-heavy nonfiction book (well, hey, what else does a student think when they hear their teacher is writing a book?). But anyway, it turned out to be one of the best books I've read.

The Stone Dragon is a fantasy book revolving around the protagonist, Glimmer. At first glance, it may seem like the average fantasy novel, solely about dragons: the fire-breathing monsters who live in caves of solitude and horde massive amounts of treasure. The dragons in this book are much more complex. They are more like divine beings than just physical creatures. Like primal forces of the Universe would be the best way for me to describe them. The elements of fantasy that do show up in The Stone Dragon  are refreshingly original in the way they are told and crafted in the story. Gnomes, dragons, and magic would be my prime examples of individuality.

The characters in the story are interesting and each have their unique personality. For funniest character, I have a soft-spot for the character, Cabbage-pants. This little cabbage gnome has some of the best dialogue of the book and is obviously the witty comic-relief. His unique personality constantly kept me on my toes as to what he would do next and his mysterious disappearances and reappearances added to the magic of the story. Perhaps, Cabbage-pants has some magic of his own... ah, ah, ah, you'll have to read the book to figure that out. Cabbage-pants even ends up being a kind of mentor to Glimmer as the story goes on. His wise sayings can be found all throughout the book:

"Glimmer, gleam, glitter-it's not name but person that makes th' worth."

Hmm, it's probably all that cabbage tea...

Another one of my favorite characters is obviously the dragon. I will leave this character a little mysterious for now because I don't feel I could do him justice. The dragon is an amazing source of plot development and you come to like him as an actual person (or dragon) as you get to know him better.

Other than those two, I like Mage DeVasier, Master Alma-Ata, and, of course, Glimmer. Throughout Glimmer's adventures he discovers he is the most dangerous kind of mage: a dream mage. His magic is the most dangerous because it is unpredictable and cannot be controlled. Glimmer copes with his magic until he learns a technique from Mage DeVasier known as the Silence of the Saints. I will leave this a secret as well because it's a very interesting part of the story and I would hate to spoil it.

This book, however, also has an underlying theme of consciousness. As you read, it is easy to see how consciousness effects Glimmer through his dream magic and how all things are connected through it. Whether human, gnome, dragon, fox, or some other bizarre creature, they are all connected through consciousness and the true power of magic lies in delving deep within one's self to that state of inner being.

Overall, The Stone Dragon was a great and interesting read. It was cool to see how the author had a different take on the genre of fantasy and how he incorporated his one style into it. I highly recommend this book to anyone who enjoys fantasy. Actually, I recommend it to anyone!
Posted by Tom Kepler at 5:00 AM