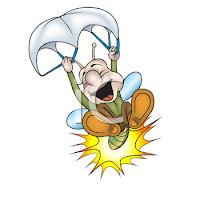 As a writer, investing in your consciousness is even more important than investing in a good dictionary. These two necessities are not exclusionary, of course. I’ve invested in the Transcendental Meditation Program and Webster’s unabridged dictionary. It's also important to know that the best word is not always the longest. Sometimes the right word is very simple; sometimes a more complex word will distract.

Words should get across what you are trying to say in a “precise, meaningful, and natural way.” According to the Northwest Regional Educational Laboratory (that promotes the 6-Traits + 1 writing program), “Striking words and phrases often catch the reader’s eye and linger in the reader’s mind.” This is a wonderful description and example of choosing words that powerfully present an idea.

The effect of powerful word choice enhances both the definitive and emotional aspects of language: words have not only an intellectual meaning but also an emotional content. “Hundreds of words unsuitable to the atmosphere will prove futile against one word of value” is how Maharishi Mahesh Yogi described the power of choosing the lightning instead of the lightning bug power of a word.


Who you are has an important impact on word choice. Another value important to word choice is consideration of the audience and purpose of the writing. With consideration of the purpose of the writing, with sensitivity toward language as one writes, and with preparation for writing by being as wide awake within oneself as one can possibly be, then one writes...and rewrites.

Whatever is written can be rewritten. Whatever is drafted can be polished. The idea is conceptualized, manifests through the consciousness of the writer to the page, and then the writer can allow this child to meet the neighbors--other writers and users of language. In order to use the most effective words, a lively connection must exist between the writer's vision and the writer's sense of audience. Sometimes that "audience" can be a very focused group--maybe even your own self!--but other times, that audience broadens, and then the task of making the vision accessible to all becomes more significant.


I've heard of some writers who have a particular person they write to--maybe a cousin. This isn't such a bad idea. Using such a technique can have an effect on not just what words are chosen but also on how the words are joined into phrases and sentences. Our audience affects what we are writing about, the words and sentences we choose, and the voice with which we speak.


Don't have an audience? Then you are probably writing to the audience of . . . you! This is fine, I think, but if, at some point, you plan to share with someone besides yourself, then you have to look at what you've written with a more universal eye. Sixty seconds after I finish writing something, my first reaction is usually, " This is the greatest thing I've ever written!" Looking at it a month later as I prepare to revise for publication, I realize that initial enthusiasm is . . . over-enthusiastic.


The link between knowing yourself and knowing the right word to use is very direct. Perhaps that's why many writers have doubts. In all honesty, can we really paint the beauty of a sunrise with words? We can do our best to evoke someone's memories of the sun rising if we choose the right words, and with those words and the reader's imagination, maybe that's as good as we can do.


Can't think of the right word even though it's on the tip of your tongue? Maybe you'll get lucky and a friend will find that word for you. Like wild berries, words are already glistening in the meadows of our language, ripe for the picking. Make sure you don't sleep through the morning.

Copyright 2012 by Thomas L. Kepler, all rights reserved
Posted by Tom Kepler at 5:35 AM