Who Listened to Dragons, Three Stories is now available as an e-book for $0.99 at Amazon Kindle and Smashwords. Because the e-book is on the Smashwords premium catalog, it will also soon be available at Kobo, Sony, the Diesel Bookstore, and at Barnes and Noble.

I wrote four short stories over winter vacation from teaching, and writing these stories was a joy. "Filling in the map" of the Dragons of Blood and Stone series deepened my interest and understanding of the fantasy reality I've created. Writing these stories also gave me the insights I needed to begin rewriting the sequel to The Stone Dragon.

Set in the same reality as the fantasy novel The Stone Dragon, these three short stories continue the magic of the novel. Two brothers--one the strange one, the other the brother of the strange one, desert and wyrm, river's daughters or river nymphs, soldiers or assassins, retribution or abomination . . . Visit a land where magic makes all things are possible. 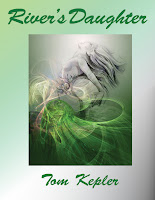 "Who Listened to Dragons": "I was a young man who thought I knew the world and owned it—right up to the moment I opened my fist and found it empty." Two brothers live in the city of sands--one is the strange one, the other the brother of the strange one. Who can tell where magic ends and mystery begins when one can lose the world in a grain of sand or find wisdom in the whisperings of the wyrm?

This short story was an interesting write because the two main characters are a twelve-year-old boy, who tells the story, and his six-year-old brother, who is autistic. Having the magician be a six-year-old autistic boy was a challenge that made writing the story exciting.

"River's Daughter": Those are three kinds of fish: those to throw back, those to keep, and those to toss on the river bank for the foxes. Is the same true for men? When a man comes to the cottage by the river, a sprig of columbine in his hat, how will the river's daughter choose?

A more adult story, "River's Daughter" was written with the tone of a legend. I took a character type from The Stone Dragon, a water naiad, and wrote a story about a naiad not in winter but in spring. Contained in a magical human body, how does this cosmic presence interact with the phenomenal world during the spring--and then I added a crone as a balancing element.

"T 'Uk's Dilemma": Kill Corinth: the job was simple. But who is the lady who meets him at the door? Who is he who stands before her—boy or man, soldier or assassin, retribution or abomination? And is it true that everyone deserves a second chance?

This story also is inspired by events in The Stone Dragon, although it takes place prior to the storyline of the novel. A glimpse is provided of Knight's Landing, Madrone, and some background is provided for the Sisters of Hospitality.

These stories provide a varied introduction to The Stone Dragon and the Dragons of Blood and Stone series. I plan for the second novel of the series, Dragons of Blood and Stone, to be available before the end of 2012. Also planned is a collection of short stories, Tales of the Stone Dragon Inn, that will be out the following year. These short stories will be included in the collection.


Copyright 2012 by Thomas L. Kepler, all rights reserved
Posted by Tom Kepler at 5:26 AM