Jerry Seinfeld: Comedians in Cars Getting Coffee, a review 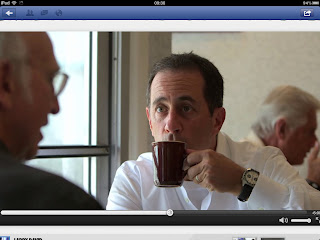 Every Thursday the series posts a new episode of about twelve minutes where Jerry calls a comedian friend about meeting for coffee. Jerry picks his friend up (each episode features a different car), they talk while driving, and then they stop for coffee, each week in a different diner.

I watched about a half dozen episodes (all that had been posted so far) on a Wednesday when I was home with a cough and a cold. Jerry's quote is accurate: one fifth of an hour is a good length to watch two comedians (all men, so far) while they sit, drink coffee, talk and joke. Viewing all the episodes in a row made the show's set-up wear thin. Twelve minutes is just the right time to hang out with some guys who have made a career of being funny, hearing them wisecrack and riposte their way through a cup of coffee.

My favorite episode is Jerry with comedians Colin Quinn and Mario Joyner. In addition to witty segments about "how the neighborhood's changed," Joyner tells some really funny stories and Quinn has a great comic moment while he silently samples a blood sausage. Blood sausage? Sounds gross, but the shared moment and that thoughtful look on Quinn's face are worth the eleven minutes of that particular show.

The camera work and editing are also easy on the nerves--professional and clean; the pace is deft and makes the most of the material and moment. That is something to say because there is no plot or script other than the general format of each show: car, drive, coffee, and conversation.

Reviews for the online web shows are not universally full of acclamation. The New York Times review posits, "There’s not much to it, but it’s got some charm and a few laughs . . ." England's Telegraph reviews, "You can see why some people will find the cackling, back-slappingness of it all too self-indulgent . . ." However, these comments appear in balanced reviews of both negative and positive.

Is this a show about nothing? I think not. The episodes are not profiles of comedians, more portraits--or better yet, sketches. Through careful editing, what is revealed are pencil portraits of comedians enjoying their avocation: being clever with words, commenting on the humor of being human. They are more humorists in the tradition of Mark Twain, wittily observing what it means to be alive and blundering through life.

Don't take the shows too seriously; after all, it is humor. However, take seriously Seinfeld's commitment to producing a quality moment for the viewer. There is no advertising attached to the website. Each episode includes "Spare Parts" segments, outtakes not included in the twelve-minute episode. And, finally, the quality of image, sound, and editing of each show provides a professional dimension that is reassuring, eschewing the "warts and all" vibe.

Personally, I don't drink much coffee, but tea's allowed on the show so I feel invited. In his Huff Post interview, Jerry said, "I wanted to make something for comedy fans and people that wanted to maybe experience this other side of the life of these comedians."

It's what we all want: to be successful with what we love to do and to spend some quality time with friends, just talking and having fun. Thanks, Jerry, for allowing me to come along for the ride.


Copyright 2012 by Thomas L. Kepler, all rights reserved
Posted by Tom Kepler at 6:56 AM