The Rules (For the Game of Life): a book review 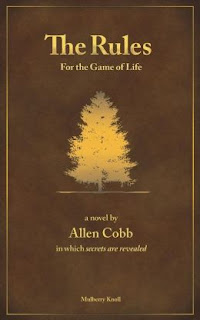 Simply put, The Rules (For the Game of Life) is one of the most enjoyable books I've read in a long time.
The simple bones of the plot of this novel is that God has conversations with Harvey during the roll-out of Harvey's life. Harvey is the Everyman of the avoid-discomfort-at-all-costs generation. God is surprisingly appropriate to my world view--no noticeable gender, kind, truthful, and willing to occasionally speak in the venacular.

The plot unfolds easily and naturally, without the pretension of jungles or burning bushes (unless one considers Malibu, California, a jungle or desert of sorts). Expect unexpected ideas in a familiar setting--a sort of hitchhiker's guide to consciousness. Harvey meets "the voice" in the pine tree at his sister and brother-in-law's house (who have asked him to move out), on an ocean beach beside his BMW, on a sun-warmed stone in Lake Tahoe, and in the solariam of a retirement home.

The rules, of course, are important to the gravitas of the subject matter--and they hold up quite well. The rules make sense but also allow enough interpretation to stimulate not only the dialogue that comprises much of the book but also the reader's curiosity. This fits in well with the subtitle: An inner dialogue, in which secrets are revealed. The rules, as they are revealed, do have a cummulative effect.

The real power of The Rules (For the Game of Life) pleased me immensely. The real power of the novel isn't secrets from God revealed but the power of Allen Cobb's prose style. The charm of Cobb's prose writing is that it is so easy to read; it is so natural that one just listens and believes. Yes, I'm saying he makes conversing with God totally believable. He makes God a believable character: immense yet compassionate.

For me, the rules were about how we structure a world of our own making, and then we enter into it and live our lives. A great insight for me was how true it is that we live a great deal of our lives on "automatic pilot"--and to judge that as good or bad is missing the point.

One aid I would like to have had with the book is to have access to the list of rules--numbered and all on one page at the back of the book so I wouldn't discover the list until I'd gotten through the book one time. When God says, "Rule number 3, Harvey," I'd like a quick reference to that rule when I read the book again.

And I will read The Rules (For the Game of Life) again. The prose is easy to read, but that doesn't mean the ideas aren't deep. Read this book. I think you'll find it reassuring.