A Day Out with Mom #9: on birth and death 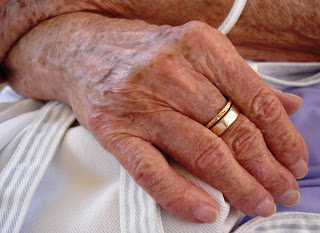 When I was sixteen, I asked my English teacher how to write a letter to Kansas to find out about my adoption. When I got my birth certificate, my mom was mad at me. "You don't need to know about any of that," she said. I wanted to know, though, and she wouldn't help, so I just went ahead and did it on my own.

My birth mother was a Practical Nurse like I became after I graduated. She was part Irish and had reddish hair. My birth certificate said my father was part Indian. It didn't say what tribe, and with Kansas being so close to Oklahoma, it could be anything. Being Indian must have been a good part of him or it probably wouldn't have been mentioned on the birth certificate. One professor at the college where your sister worked told her he could tell she was part Indian by her cheekbones.

It doesn't matter who gave birth to you. Your real parents are the ones that raise you. I told this to your son so he'd know. I told him to love and respect the ones who raise you because they love you. My brother fell apart when he found out I was adopted. I told him it didn't matter. He was my brother, the only one I had, and I loved him.

Even though I'd been blind when young and spent my life not seeing well, I was still my own person and had my own ideas. It was a different time to go to high school back then. The year I graduated was the year of the war, and there weren't many of us to walk across the stage. Those that did were mostly girls because the boys were allowed to graduate early when they turned eighteen. Then they enlisted and were gone to fight. Even though they were so young, they went off to war.

I started nursing at nineteen, working with the woman doctor Contessa Craviotta. Her father was a doctor, too. Her husband was Dr. Bennington. He delivered your sister. He had been a doctor overseas during the fighting so he was kind of tough, but he was a good man and a good doctor. He said about you and your brother, "What've you got going having one boy on Groundhog's Day and the other on St. Patrick's Day?"

Your dad named our first two children, the girls. He named Chenel after her two grandmothers, Blanche and Nellie, using half of each name. Our second daughter he named after me, Betty Susan, but she only lived a day. She's buried in the cemetery on Feather River Boulevard in the area with all the little babies. No name was put on the stone because she didn't live a full day.

I knew there was something different about her because she didn't move like Chenel did. When Chenel was born, I hemorrhaged and had to have many transfusions. I wasn't supposed to have a baby so soon so the blood would settle, but the little baby came along. She was buried in a little white casket. Your grandmothers got her a white gown to wear. Dr. Craviotta wouldn't let me go because I was so weak. I cried and cried, but you've got to keep living and I had your sister to think of.

I named you after your grandfathers, and Pat was named by Dr. Craviotta. We were going to name him "John" after your grandfather's brother, but everybody at the hospital wanted to name your brother "Pat" because he was born on St. Patrick's Day. They said I could take him home early if I did and I'm part Irish, so that's the way he was named.

Both of you boys were put in incubators to keep you warm. You were my smallest child. Your Grandpa Kepler wanted you named "Leon" after your dad's older brother that died. Grandpa was going to town with eggs to sell when he turned the car over and Leon died. Your grandma said that Lee never forgave himself for that. Maybe that is why your grandpa was always so hard on your dad. Your grandpa always said you looked like Leon.

Your Grandpa Kepler would show up in his pink Cadillac with a gallon of strawberry ice cream and a big bowl of popcorn. He'd open the ice cream and sit down on the floor with you kids with spoons and ice cream and popcorn. "You're going to give the kids a stomachache," I'd say, but he'd just laugh and say, "Oh, let 'em have fun!" He liked to laugh and have fun. So does your dad, but he never laughed like your grandpa did. I don't know why. Your Grandma Kepler never laughed out loud so much either.

Your dad worked hard to raise you. When Chenel was born, we lived in a little town called Dobbins, up above Marysville in the mountains. We didn't have a refrigerator--we had an ice box that kept the milk and butter cool. Your dad worked construction, driving the dynamite truck. He did that for a while, but your grandpa didn't like him having such a dangerous job, so your dad got a job being a mechanic. He always liked working on cars, and it was something he was good at. He drove trucks for a while but didn't like being away from his family so much, so he settled down to working on cars, something he did all the time he raised you kids. At one time he was number 6 in ranking of all the Ford mechanics in the United States.

Everything we did, we did with you kids--racing go-carts, baseball, camping. We always did it as a family. On Fridays, I'd work all day getting the little travel trailer set up with food and everything we'd need. I'd make macaroni or potato salad. Then your dad would come home with the ice, we'd load up the food and take off for the mountains. Remember how we'd go up to Indian Creek and you boys would fish and float down the creek on your air mattresses? You boys would pitch your army pup tent and sleep outside. Your dad and I and your sister would sleep in the trailer.

One time your sister had a boy come along to camp with us. We were down at the creek, and your sister let that boy eat the whole bowl of potato salad. I said to him, "How could you go and eat the whole thing?" and he said, "Your potato salad is really good!" I was so mad at him! It was our food to eat, after all, but it was kind of funny.

Your dad and your sister fought all the time. They were too much alike, I think. She left home at seventeen, dropped out of high school her last semester. It was such a silly thing to do but she was so angry. She joined the Job Corps, met some tough kids, dropped out, got married, and had your nephew Bobby. Then she divorced. For a long time Chenel and your dad didn't talk, but when she got older, they got along better. She moved to the trailer court across the road when she was told she had six months to live because of cancer. It was all through her body. We were with her at the end. She wanted her family at the end.

I don't know what's going to happen with your dad. Nobody knows when they are going to die. That's something God knows and decides. Your sister asked her minister, "Why did God do this to me?" He said, "God didn't do this. Your body did." That seemed to help her. She always liked to sing. It was her favorite thing in school, and later she sang in the church choir. Your sister had a beautiful voice. Now she's gone, and I don't know about your dad. He's had a long life, and we've done many things together in our sixty-seven years we've shared. I don't know how long I'm going to live! None of us do.

We've just got to try to enjoy life and be good people. Your dad's like a little baby now a lot of the time, and I'm sad that I can't be with him all of the time because he's in a rest home. I'm not strong enough to take care of him, though. I know that. I'm not senile! But if he wants to come home and gets stronger and can stand, I'll bring him home. We'll figure something out.

I don't know what to do. We've spent so many years together. I guess I've just got to put it all in God's hands.

Copyright 2013 by Thomas L. Kepler, all rights reserved
Posted by Tom Kepler at 6:00 AM

Email ThisBlogThis!Share to TwitterShare to FacebookShare to Pinterest
Labels: Dragons of Blood and Stone, family, retirement