Quality of Life and Security 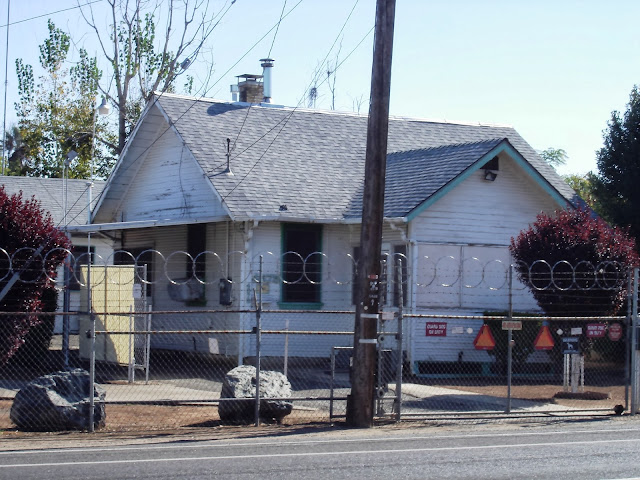 In my current hometown in southeast Iowa, there are, of course, issues such as security, poverty, crime, drugs and alcoholism, and being homeless.

It's just not so obvious, though. And, I have to believe, not so widespread.

The above photo is a house I rode by on my bicycle here during my visit in California. It's in a section of town that would probably be called "the tougher part," and it's also on a major transit road in town. The house's "security" gives insight to both the town and to the home's owner. For me, it exudes the sense of being besieged, and I find that depressing (as I'm sure the home's owner does).

During my six-month stay in California, in my early-morning bike rides I've grown used to seeing the homeless sleeping on the blacktop in commercial parking lots. Around dawn, individuals can be seen coming out of the woodsy fields where they slept for the night. I regularly see people pushing prams, grocery carts, and pulling wagons loaded with their possessions. Quite a lot of people ride bicycles, and it is evident from their clothes--and the fact that they're smoking a cigarette--they aren't bicycling for their health. I got hit up for spare change so often that I began to automatically initiate deflecting behaviors.

This is not to say many of these issues in Iowa are not present. There is a great deal of poverty in southeast Iowa. School free lunch programs are federal gauges for poverty-stricken areas, and southeast Iowa is right up there with some of the big cities. Poverty is more hidden, though, finding its place on gravel roads or on the sofas and spare rooms of family and friends. The weather in Iowa is too unforgiving to support large groups of homeless living in camps in the woods.

Just yesterday I was walking in shorts and tee shirt. Sure, the morning are nippy now, but I guess "nippy" is a relative term. Nippy in Iowa probably starts with frost, although we all love to complain. "Nippy" here is the Central Valley of California probably is around 50 degrees.

At the mobile home park where my parents live, twice the mailboxes have been raided by two different groups stealing mail. (Both "rings" were busted due to the benefits of security video cameras.)  The sheriff department regularly cruises the park, and the other night they came with flashing lights for a disturbance.

A major homeless camp near the Feather River was raided by law enforcement over the summer, providing an opportunity for the county to help those individuals with drug and mental issues to have more support. That was how one officer phrased the purpose of the raid. The on-going challenge of dealing with the homeless, and the size of the local homeless population, is a continuing item for discussion in the area.

Am I saying these problems are fewer in the southeast corner of Iowa. I guess I am saying that, although I caution myself that not easily seeing evidence of a problem doesn't necessarily mean it doesn't exist.

I wish the best to this area where my family lives in California. Being a native son of California, I know that often California leads the way (some would say leads "a way") in how to deal with social issues. I wish the best for the world, realizing that social health is created by having many individuals who are physically and mentally healthy, who are strong within themselves.

I'm ready to go back home, though, where I can ride my bike across town and not easily see at least 20 individuals who are living on the sharp and bitter edge of society. I feel guilt that I've stopping noticing, so that number of "20" is pretty arbitrary.

Winter's coming, and I wish each and everyone a safe haven when the dark winds reach us.