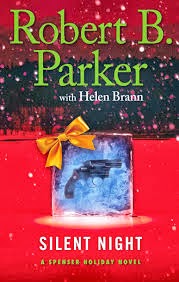 Silent Night is "a Spenser holiday novel," according to the cover. It was the novel Parker was working on when he died, and was written with Helen Brann.

Brann's author's note at the book's end tells that she was Parker's literary agent for over thirty years. Soon after "Bob's" death, Brann was talking to Joan Parker, who wondered what would happen with this last novel.


"Without thinking, I heard myself say, 'Maybe I should try to finish it. Could I? Should I? What do you think?'"

Joan Parker responded with an affirmative, "Go for it!" and the novel was finished.

The question is, of course, how this novel stacks up against all the other Spenser novels, and I can assure that this novel was an enjoyable read.

This case by Spenser takes place during the Christmas season, and at one place in the novel, Dickens is even alluded to. That supplies a subtle background comparison for the action. There is a turkey (actually a "turducken" in this novel), a street urchin, and the motif of giving and embracing one's humanity.

I wouldn't taken that too far, though. I wouldn't characterize Spenser and Susan as the Cratchits or Hawk as Scrooge. The literary allusion is enriching, though, and characteristic of Parker's work in this series.

A homeless boy named Slide is in danger from the bad guys, and Spenser and Hawk aim to set things right with some tough-fisted and straight-shooting Christmas cheer.

If I had to choose anything that differs from all the other Spenser novels I've read, I'd say the some of the witticisms and repartee are, although completely within character, at times not as new as hoped for. Co-author Helen Brann was completing Parker's novel, though, and not striking off into new territory. (And, in all fairness, read enough Spenser novels, and some witticisms show up as retreads.)

This novel does provide some new insights into the lives of Spenser and his circle of friends, especially Hawk. I'd like to think that is somewhat due to Brann's influence, that she caught Parker's direction in the novel and added to the tome.

I don't know how finished the novel was when Parker died "in harness" before his keyboard. I'd like to think that Robert R. Parker's last novel ended with a collaborative effort with his longtime literary agent and friend Helen Brann and that because of her fingers on the keyboard, the novel contains a lovingkindness that extends beyond just plot. Such connections are in the spirit of the holidays--or holy-days--bringing more unity to the world.