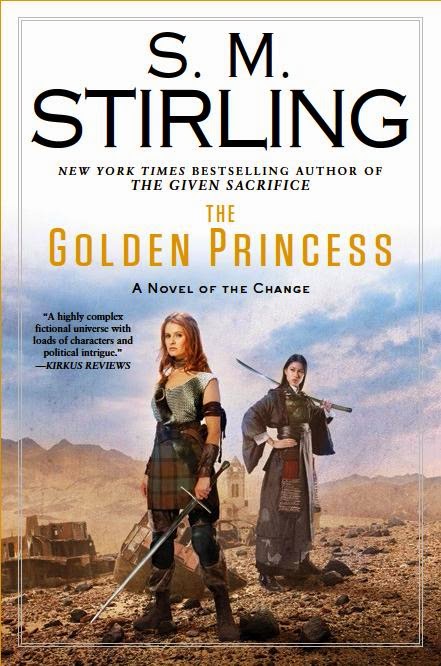 "Quantity has its own quality." Readers of S.M. Stirling's the Change series are familiar with this saying. It's true for the eleven alternative reality novels written about the "Change," when the Someone or Something, maybe "alien space bats," took our toys away from us, and the world is jammed back to using medieval technology . . . more or less.

Out of these eleven novels, some are better than others, but the quantity of words in total has its own quality, carving an alternative reality quite interesting in its speculation of how cultures evolve and how people react to catastrophic change. The Change series begins its third cycle with the novel The Golden Princess, with the coming of age of the third generation since the lights-out year of 1998.

Dies the Fire is the first novel of the series, and in the five-hundred-page novel, five pages at the beginning set the "prior to adventure" reality, and then the story launches into action. Therefore, one percent of the novel is the set-up. In The Golden Princess, the first major action is around twenty percent of the way through the novel, and this is the pattern of the novel--a little action and lots of characterization and travelogue.

The "travelogue" aspect isn't all that bad for someone like me who has read the earlier ten novels. For instance, I found it interesting when the Rangers, modeled after the Dunedain of Tolkien's novels, expand their forest steadings to the old forest redwood groves of California (now Westria). I found it interesting to read about how Generation One assassins have mellowed (more or less) in late middle age. I found it interesting how the McClintock blue-tattooed clan is structured. But as Stirling leads us through third-generation Montival, describing how the from-the-ashes societies have evolved and providing backstory for where they started from and from whom, the plot sluggishly progresses. Mark you, having read the earlier books, I found the anthropological detail interesting, but I had to accept the author was in no hurry to get on with the action--that's for later books, I assume. (I hope!)

If you've read the ten previous novels, enjoy the author's wide angle lens on Montival, enjoy some glimpses of the Far East, and forgive the fact that this is an introduction for a new generation of readers who have stepped in on the story anew with this book. If you are a new reader, consider this Stirling's attempt at the Canterbury Tales. Meet the characters, listen to their stories, and know going in that the story has no ending.

Thank the gods that quantity has its own quality; therefore, I can give this novel a just-past-the-bar three-star rating. It's OK. If I hadn't read the earlier ten novels and therefore found the anthropology interesting, I believe I'd have despaired. You know, Stirling didn't have an easy job, beginning a new cycle of Change novels while simultaneously providing backstory for the last ten. Now that it's done, though, please don't dilly-dally so with the next novel, Stephen Michael. I believe I might just be that Someone who pulls the plug on the next book.

Copyright 2014 by Thomas L. Kepler, all rights reserved
Posted by Tom Kepler at 7:00 AM