Book Review: The Change: Tales of Downfall and Rebirth, by S.M. Stirling 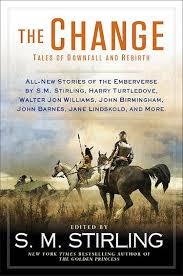 Alternative history and speculative fiction author S.M. Stirling has published soon-to-be twelve books from his "Emberverse" world where in 1998, the "lights went out" and the laws of nature change, setting the world back to where only Middle Ages technology was functional. Now Stirling has edited and shared a short story along with fifteen other established writers in the anthology The Change: Tales of Downfall and Rebirth.

It would be fair to say that the sixteen short stories add just as much insight into the Emberverse reality as the eleven novels of that reality that Stirling has written. This, of course, is true because as editor of the anthology, Stirling could ensure that the vision remains true, or consistent.

At one time, "California" was just an idea, a name for the lands of western Mexico and the U.S. west coast. It is speculated that the name came from a popular Spanish novel of the 16th century, Las Sergas de Esplandián, which describes a land ruled by black women. The new discovery of the west coast of the Northern Americas came with rumors and speculation, which gained the land the appellation Las Californias. Travelers visited Las Californias, reports returned to Spain, and fact replaced rumor.

The anthology The Change, in somewhat a similar manner, provides readers in Stirling's Emberverse a similar experience--focused reports of how "The Change" occurred in different parts of the world, progress reports on humanity's efforts to rebuild during the first three generations after change, snapshots from around the world: the Mediterranean, Britain, Australia, and Mexico. Also, tales in the former USA are set in Alaska, Florida, California, Utah/Idaho, Nebraska, and Colorado/Wyoming.

Here's another description: the lands of the Haida, enclaves that existed in the death zones on the east and west coasts of the United States, the birth of New Deseret, survival and re-settlement of the High Plains and the Midwest. The writers of these short stories give to readers people and places, the sweat, the blood, and, yes, the tears of the wrenching Change Stirling's alternative history chronicles. Stirling has granted traveler visas to fifteen other historians, and our knowledge of the Emberverse is enriched.

The stories are filled with interesting characters, research is evident, and the culmination is a real pleasure to read. Get the know the demons of Witmer Hall, or Bernie of the apes, or the Seeker of the Chihuahuan Desert with his friends Thought and Memory. Travel the necropolis of Sydney, Australia, seeking treasure, and fight with the heroes of Topanga Canyon in the Dead Zone of Southern California. Trail along with an alternative history Louis L'Amour-styled hero in the American Southwest deserts.

For those of you that have read all of Stirling's Change novels and have sat back and speculated on how things went down and on--enjoy these tales where thoughtful and creative writers have done the same thing, their words letting us be the boots on the ground.