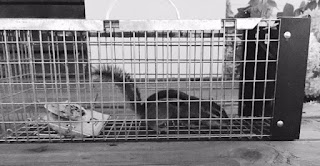 Two chipmunks have been relocated.

They were tunneling in the window wells and burying the drains, threatening a flooded basement in a deluge. And deluges do happen in SE Iowa!

We all know chipmunks are cute. Sometimes we feed them when camping or at the park. However, the chipmunks that came to dinner at my house decided "tu casa es las casa de nosotros," so I bought a live trap to get rid of them. It wasn't as easy as the instructions of the box indicated.

My first learning curve was the trap. The trigger for the trap was burred and did not trip easily, resulting in several days of loading the trap and finding the next morning that the bait (peanut butter and sunflower seeds) had been eaten. Using a screwdriver and some bike chain oil, I created a hair-triggered trap. Look out, rodents!

The next morning, the trap had been triggered, the cage door had fallen, the bait had been eaten, but the cage was empty. I'm still not certain (and this has happened several times, including last night), but I think mice eat the bait and then squeeze out of the wire openings. It's that or really smart chipmunks.

I finally caught one chipmunk and relocated it to the Pleasant Plain lake area, dropping it off in the weeds at the edge of the parking lot. Go, Trapper Tom! Then several days of tripped, untrapped, baitless failure.

Last night I saw a chipmunk near my coiled garden hose in the front yard. It looked at me as if saying, "Hey, what do you think you're doing in my yard?"

I baited the trap and set it next to the hose. Success! A second chipmunk was relocated, right where I'd dropped off the first, in case they are friends.

I baited the trap again, leaving it in the same location. This morning the trap was sprung, the bait gone, and the cage empty.

It's a mystery, but I'll keep at it. I don't want to wake up in December with Alvin and his chipmunk friends singing "Christmas Time Is Here."
Posted by Tom Kepler at 11:45 AM