Looking Back at Revision 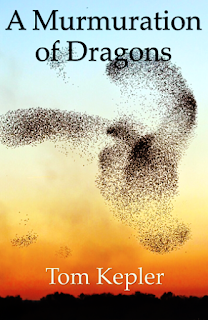 For me, revision is an intuitive process. When I say that, though, I should add that I feel that intuition is mind working at a fine level of the intellect. Intellect and “feeling” work together, each augmenting the other.

The revision of tightening (deleting), expanding (adding), and polishing (substituting) works first on what feels right, but there is always the quiet voice of the intellect providing the reasons for the feeling.

As I’ve mentioned before, I tend to write my beginnings many times before moving on. Those rewrites are where I emphasize tone and word flow. Once the words create the tone (once the tone feels right), then I move on to finishing the rough draft.

Below, I’ve provided two excerpts from my Wattpad page where the story “A Murmuration of Dragons” is posted as two parts, the first being the finished story (unless I change it), and the second being the first draft of the story (and by that, I mean the story after I’d established tone and then pushed through for the first time).

With this short story, I see the revision has focused the prose more on tone and immediate experience rather than backstory, even though I am filling in and establishing the reality of the story. I think the revision works more to move the story to its climax by establishing an emotional context.

Other readers might like the original, actually! This post is a closure for me. I’m looking forward to moving on to another project, another story--at least, for now. Read, enjoy, and maybe even read the other stories posted on Wattpad. They are the two shorter stories of the three short story ebook "Who Listened to Dragons."

Excerpt from the revised (completed) story

Garden lore says "weeds for the wildwood," that every vegetable patch should have a spot uncultivated, that "wholly wild is holy wild." Perhaps craft elders felt the same and left Dragon's Head untouched. Superstition runs deep, even when "as dead as magic" is the common wisdom nowadays, for who has seen magic? Yes, there are stories, but who has seen magic? Our mouths do not always speak our hearts, though, and words may veil rather than reveal. Perhaps that was the way of it on Half Street because Dragon's Head was let be, and the oddity of that neglect was somehow too strangely idle a thought for busy tradefolk.

Caul said that suited him fine, Caul who ate and drank the sky above Dragon's Head, either that or nothing. He certainly slept sky, all those nights up there alone, earth for his bed and stone for his pillow.

I wouldn't admit to be looking after him from my perch on Old Jin's roof, not me, of Fingers fame and all of twelve years. It didn't take much minding, anyway. Somehow I knew he was safe when he climbed those bare bones, riding his dragon, whinnies and all.

The need to survive can birth strange and wonderful alliances, and one of boy and stone was not exceedingly strange. Who has not played at being king on the mount? Seed planted wild must root deeply, and dreams dared in sunlight burn an invisible flame.

Such had not happened, though, had apparently never occurred to some greedy guildsman or ambitious matron. Dragon's Head was just let be, and the oddity of that neglect was somehow too idle a thought for busy folk, which Cobb said suited him just fine. Sometimes Cobb would look at me as he rode the stones, but he never waved and I never thought to wave at him. Cobb was a strange one, one we looked after--or would have, if he had ever needed it. He didn't, though. I think Cobb ate and drank sky. He certainly slept it, all those nights alone on Dragon's Head.

My gut told me a lot about Cobb, or maybe it was my heart. I knew that when he climbed onto those bare bones of stone and rode the dragon he was safe. It wasn't that I knew he felt safe; somehow my gut told me he was safe.

I knew in my bones he was safe on Dragon's Head, knew that he knew in his bones he was safe. No children ever challenged him sitting there in plain sight. It was as if he were veiled by wings of forgetfulness. I saw him, though, and I'll never forget what I saw.

It was a strange alliance, boy and stone, but the need to survive can birth strange and wonderful alliances. Seed planted wild must need root deeply.


I've found it an interesting process to publish a rough draft and then another, polished version of the story side by side. I don't know if I'll do this again. Probably not, but doing so has given me the opportunity to reflect some on how I create as a writer. I doubt if how I write and revise is unique, but self-reflection isn't such a bad thing.