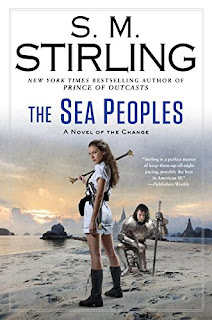 The Sea Peoples is S.M. Stirling's fourteenth novel in his Change series, if one counts the anthology The Change, which he contributed to and edited. The fourth novel in the third generation cycle of the series, although not one of the best achievements in this series, The Sea Peoples is certainly not the worst of the batch--let's call it four stars out of five. The fleshing out of secondary characters and the introduction of an extended excursion into magic are two reasons why this particular addition to the series is a significant contribution to Stirling's alternative reality oeuvre.

The secondary characters introduced in the first works of this cycle of the series mix it up, providing most of the action as they engage in their dreamtime, magical quest. Captain Pip (Lady Philippa Balwyn-Abercrombie) is one interesting character, a roustabout with aristocratic ancestors, dressed in "white shirt and shorts black as her boots and suspenders and steel-lined bowler hat." She is paired with Toa, a Maorian who is Pip's protector, although she hardly needs protecting. The quest group also includes Deor Godulfson, a Nordic scop and totemic magician; and Thora Garwood, a Bearkiller female warrior and fighting partner to Godulfson.

This quest group must enter into the dreamscape of alternative realities/magical possibilities to rescue a fellow warrior, utilizing their individual animal spirits to keep their souls safe from the evil that contaminates the realities they navigate. Stirling's development of these characters, their interactions with one another, and their individual traits keep the action lively and fresh. Their individual skills also allow for their journey into the fluid realities of several worlds--possible realities that have diverged from their original homeland. This shape-shifting of reality is a tip of the hat to the legacy of Roger Zelazny's fantasy Amber series. Stirling carries it off well, and this soul quest through apocalyptic landscapes is the main action in the novel. Part of the pleasure of reading this novel is to experience the development and mastery of the characteristics of the new world three generations after the Change. The world Changed, and forty-six years later, the children of the world understand and work much more successfully with the new rules of existence.

Princesses Orlaith and Reiko travel to Hawaii in this novel, and that thread of action includes the massive sea battle at the end. Stirling's good at sea battles, as seen in other novels in this series; however, the development of the Hawaii action is overshadowed by the dream question plot strand. This is a weakness of the novel, even though it was necessary to further the plot so that the next novel in the series can move forward--cumbersome, but the job got done. Prince John is also in this novel (the main character in the novel prior, Prince of Outcasts), and his character is more three-dimensional than in the previous novel, although the prince is actively present in only a small part of the novel.

The final good news about The Sea Peoples is that it doesn't end with a cliffhanger. There is a good sense of closure for this novel--and then an epilogue that tantalizes us with a hint at where the next novel will lead. Considering the perspective of the first novel of this series, Dies the Fire, Stirling's most recent contribution reveals just how different the world has changed since the Change. His new foray into earth magic keeps the series from just being a continual slog of enemies and battles and new generations doing the same old things. Reading this third-generation cycle of novels has been and up-and-down experience, and I'm glad that this novel was a good steady-as-she-goes contribution to this alternative history.