A Cat Has Nine Lives--How Many a Writer? 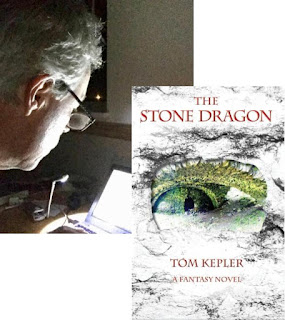 It's good to be writing again, and it's also good to know that I started up again by just "following my bliss," by writing for the joy of it. Like everyone, my life has encompassed several "lives" or phases. Throughout all the phases of my life, though, writing has been a constant. I began this current phase of my life after my first wife's passing, and my publications during this phase reflect the changes that have occurred during this time--my first wife's death, marrying again, my son growing up, job change, moving to a new home, the passing of my parents.

A major writing achievement during the last decade was the creation of a fantasy-genre universe--the Dragons of Blood and Stone universe. The fantasy novel The Stone Dragon was the first product of that vision, the story of Glimmer, a young man who dreams his magic and who must learn to control his dreams.


After publication of the novel, I later began writing short stories set in the same universe. A small ebook, Who Listened to Dragons: Three Stories, was the result of my curiosity of what else was going on in the DBS universe. 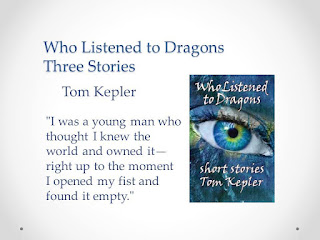 A half dozen other story ideas set in this universe--and two fully developed stories, "A Murmuration of Dragons" and "Perchance Beneath a Quince Tree" led me to the possibility of collecting the stories into a book, Stories from the Stone Dragon Inn. The last few years I haven't written much because of family obligations and also personal changes and trying new things. It occurs to me now that the smaller projects of writing short stories is a good way to move back into fiction and publishing, with five stories already written for the Dragons of Blood and Stone universe and good seed ideas already sprouted. Stories from the Stone Dragon Inn may very well be my next fiction book publication. 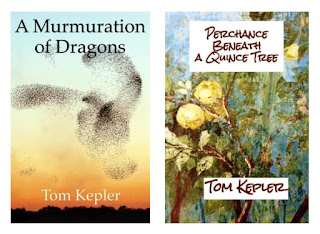 One enjoyable aspect of short story writing, especially flash fiction (stories less than 1,000 words), is that I can try out new styles of writing, new angles, new characterizations, and not be committing to a hundred thousand words. I published an early short story in 2010, titled "Cull," in an online magazine called Metazen, now defunct. (Ironically, the URL link now goes to a car rent agency!) I've also published two flash fiction stories not connected to the DBS universe, over the last ten years. "Spider" was my experimentation with a horror story, published in Every Day Fiction on Halloween Day, 2010. I actually got paid a dollar for that puppy. The second flash fiction story was published in a science fiction zine, 365 tomorrows, on New Year's Day, 2011. It's title is "In the Beginning," and it is a story about the genesis of our species. I seem to be hitting the holidays so far! 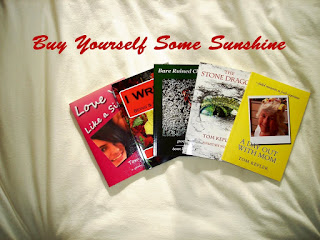 Two non-fiction books I've published were developed because of a friend's comment: "Tom, you should take those blog posts and turn them into a book, since they're all on the same subject." This comment was the seed idea that led in 2012 to I Write: Being and Writing, a series of essays about the writing process and consciousness. 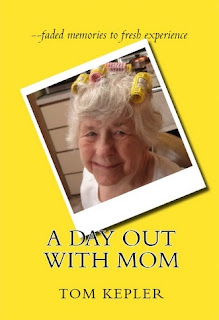 The second non-fiction book is based on my experience providing caregiving for my parents. I left teaching abruptly in the spring of 2013 to travel to California to care for my parents (and for my brother, who was their caregiver but who had shattered his leg). I blogged about sleeping on the sofa for seven months, about reconnecting with my family again--living with them as I hadn't since I was a kid. As I wrote, I found myself writing in my mom's and dad's voices, from their perspectives as they told me the stories from their lives, about growing up and all their years together. These memoirs and essays were compiled, polished, and published (2014) as A Day Out with Mom. I'm proud of that book.

I published two books shortly after I married my second wife. Both of these books, Love Ya Like a Sister and Bare Ruined Choirs, were really about my earlier life or my "first life" (or second or third?)--with my first wife and my son, and with my life as a public school teacher. 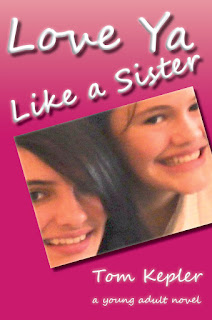 Love Ya Like a Sister is a young adult novel I began writing during the time my first wife was dealing with cancer. It was an escape, really, a chance to write and do something creative during a very tough time, but there were long lags and gaps in the writing process, due to my responsibilities. Completed years later, after my wife had passed and I had remarried, LYLAS is a novel about neglect (even regarding parents who both work and can't help not always being at home). It's a novel about the dangers of inexperienced kids driving cars, of the dangers of sex and alcohol and drugs. It's about how so many kids luck their way through adolescence, intuitively--and it's a novel about my making it through a very tough time.

Bare Ruined Choirs is a story told in poetry of the full life of a relationship--from first-met to the final dying breath. It's a small book, but some of my best writing, and is dedicated to my first wife. I had been writing poetry for my whole life up to the death of my first wife. I realized I could select poems that would chronicle the life of a relationship--lover, spouse, parent, caregiver. This book was a chance to come to terms with the changes in my life, to complete a cycle of my life in a creative and healing manner. 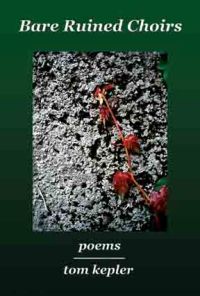 I remember a story about Isaac Asimov, the great writer of the golden age of science fiction, a man who published books that were cataloged under every major category of the Dewey Decimal System for libraries, a man who published over 200 books. Later in his life he read one of the novels he had written early in his career. Reading his own novel many, many years after writing and publishing it, the story goes that Asimov was asked by a friend, "How did you like it? How was it?" Asimov replied something like, "Not bad. Pretty good writing." I'm re-telling a story that is probably apocryphal in the first place, but here's the idea as it relates to me: I've written pieces that I think have their good, strong qualities . . . but would I write the same things now, with the same content and style? I don't think so. However, that doesn't mean I can't appreciate the good qualities of what I've written in the past.

Part of growing older should be learning to give ourselves and others a break, to have some tender mercy. This post is a retrospective of what I've written in the past, but more so it's a look to the future and its endless possibilities, of how I'm looking forward to my next word, my next page, my next poem or story, my next book. You all are invited follow my journey.