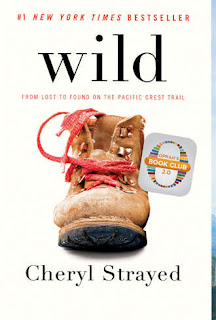 I came to this book via the back door, a little over fifteen years after Wild--from Lost to Found on the Pacific Crest Trail was published. The book's author, Cheryl Strayed, had authored an article for Vogue magazine on glamping, the angle being the Queen of the PCT taking on glamourous camping. I wrote up a response to the article after some research on Strayed, published it on my tiny trailer camping blog ("How Does Vogue Magazine View Glamping?"), and then ordered Wild for a read. I was not disappointed, Strayed displaying a strong ability to vividly describe both her experience of the Pacific Crest Trail and also the mental landscape of her gruelling challenge, not to mention her early-life challenges that brought her to the trailhead.


"At twenty-two, Cheryl Strayed thought she had lost everything. In the wake of her mother’s death, her family scattered and her own marriage was soon destroyed. Four years later, with nothing more to lose, she made the most impulsive decision of her life. With no experience or training, driven only by blind will, she would hike more than a thousand miles of the Pacific Crest Trail from the Mojave Desert through California and Oregon to Washington State—and she would do it alone. Told with suspense and style, sparkling with warmth and humor, Wild powerfully captures the terrors and pleasures of one young woman forging ahead against all odds on a journey that maddened, strengthened, and ultimately healed her." (web page blurb)

The book reminded me of Miles from Nowhere, Barbara Savage's chronicle of a bicycle tour around the world. Both Savage and Strayed begin without experience, endure hardships, and prevail. Strayed's story, though, is much more wild, at least her life prior to the journey. The lost-to-found subtitle is appropriate for the book, for the first section describes Strayed's descent into her wilderness of despair. Both books won awards, and Strayed's Wild was the first selection for Oprah's Book Club 2.0. The book was also adapted to cinema in the movie Wild, starring Reese Witherspoon and Laura Dern. The book strikes a balance between Strayed's struggle and her indomitable desire to persevere. I'm not sure if the visual adaptation can as successfully maintain that balance. Reading Strayed's recollection and reflection on family abuse and heroin addiction is a different experience than watching its cinematographic representation.

Thank goodness the pre-journey set-up is not too long, and thank goodness that there is a years-after objectivity to Strayed's description of  her travail, a knowingness by the reader that she did make it through. This, at least for me, increased my attention on the author's fortitude and just plain stubbornness as she struggles her way to the PCT's trailhead and then plunges into her wild adventure--unprepared, ignorant, out of shape, and with a knowingness that she had nothing to lose. A great deal of the pleasure of reading this narrative was to witness the slow (and painful) progression of the author to both inner and outer strength. As the story progressed and the author grew more trail savvy, the story developed its own momentum, its own increasingly headlong dash to self-actualization.

I bicycle camp, tucking my living not into my backpack but into my bike's panniers. Wild made me want to hit the trail, and not just because of the author's turnaround of her lifestream. Her ability to describe the beauty of the trail, even with its many challenges, was revelatory: sun and sky, earth and stone, the green world and the clouds and rain.

Over fifteen years later, Strayed glamps for Vogue, and even with tent-cabins and massages and gourmet meals at the lodge, she still narrows the experience of the wild to being outside, blue sky above and mountain smells as the feet hit the trail. The unbounded immensity of nature, whether inside us or outside, is there really a difference? There need not be. Beneath the grime of the toil of the trail lies the bare bones of the earth--or the bare bones of the soul, beautiful in their austerity, in their sharp, hard lines. One reviewer praised the narrative because of the power of the author's voice, and I can concur. The author in this book has found her voice, a voice speaking with authenticity from the wilderness. If we step onto the trail, we can hear its haunting song.