Robert B. Parker's last Spenser novel to be published was Sixkill, which introduces Native American Zebulon Sixkill, who becomes Spenser's protege in the fine arts of sleuthing. Since Parker's Sixkill, author Ace Atkins has written seven Spenser novels, the last I've read being Old Black Magic. I was curious about how Atkins would handle the Spenser novels. Could he write with the same rhythms and little stylistic beats that Parker employed? Could he characterize Parker's cast so that continuity of character was maintained and believable? Could the Spenser novels continue to evolve and not become petrified, Atkins slavishly mimicking Parker's art and craft?

Simply stated: would Atkins' novels of the Spenser saga possess a body but lack a soul?

I read Atkins' first Spenser novels, Lullaby and Wonderland, with some misgivings. I was not displeased but was overall uninspired to read more. There were moments where the novels flowed well--and they weren't disagreeable--but there was a certain heavy-handedness and woodenness to the action and dialogue. Parker's use of short chapters that always ended with that clever little drum roll of action and dialogue too often seemed obvious or contrived. Atkins was competent, consistent, and respectful with his material--and just too competent, consistent, and respectful with the Spenser oeuvre. I was pleased to read more about Spenser and company, but I was not inspired to read more. At least not fully inspired. There were, however, moments when Boston was Parker's Boston and Spenser was Parker's Spenser.

And so I tried more of Atkins' Spenser novels, discovering something deeply satisfying and revelatory. The new Spenser novels transformed from clever, masterful Parker forgeries to creative, innovative detective novels in their own and Adkins' right. In Adkins' Spenser novel Old Black Magic, Spenser has a conversation with a competitive sleuth about how the Brit is wearing a Red Sox baseball hat. "'You should try and curl the bill of the hat,' I said. 'You look ridiculous.'" A few lines later, Spenser observes, "Marston smiled up at me, looking very silly in the Sox cap. He wore it far back on his head like a child, with his hair loose over his forehead." It took Atkins a time, but he has fully learned how to "curl the bill of the hat" and wear it properly. Most importantly, though, Atkins is no longer wearing Parker's writing hat. He's got his own Sox cap now, all broken in, and it fits him perfectly.

Can Atkins write with the same rhythms and little stylistic beats that Parker employed?

Atkins is obviously an attentive reader because he is able to use those signature stylistic patterns and mannerisms that made Parker's development of the Spenser novels so readable and identifiable. Some of Parker's "Spenser style" included short chapters, ending each chapter with some clever beat so that each chapter was a self-contained vignette, attention to clothes and cooking, and "readiness is all," that powerful force of protocols infused with personal integrity.

As Atkins has written the novels, the good event is that the inclusion of the elements mentioned above (and more, of course) have become smoother. There is the sense that Atkins began with a list of stylistic elements that he felt must be included in the novels to create a familiar environment for the reader, yet over time those elements became more natural and less contrived. The most obvious example of this "feeling comfortable in the other guy's coat" is that as Atkins' writing has continued through the Spenser novels, the chapters have gotten longer and the end-of-chapter bada-bings have become more subtle. Atkins still pays homage to the master, yet he has discovered his own affinity toward those elements.

Can Atkins characterize Parker's cast so that continuity of character is maintained and believable? 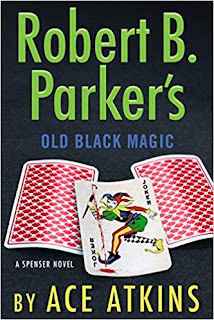 The short answer to this is "yes." I think Atkins' ability to work with Parker's characters will also improve with time. I believe this because Atkins' utilization of the Spenser cast has improved throughout the novels he has written. There are occasional missteps, such as in Old Black Magic (which I thought well-written), there are some points where I think the character of Vinnie is too glib in his dialogue. However, these smaller moments are minor compared to how believable and true the Vinnie Morris character reads as compared to Parker's characterization.

I think Atkins has chosen a very clever and effective course of action regarding Parker's characters. What Atkins has done is to take Parker's minor characters, choose those he has an affinity with, and then to develop them in his novels, to expand the characters, to essentially make them his own. He has done this effectively with Vinnie Morris and also with Henry Cimoli and the Harbor Health Club.

Atkins has also deftly managed the adoption of Parker's cast by not saturating his novels environments with the old gang--not all at once. Hawk is off working in South America; Z is setting up business on the West Coast. Quirk has been promoted and there is a new precinct captain. Atkins then can interact with Parker's characters, but not all at once. There can be Susan and Pearl. There can be a segment with Quirk, a bit of Belson, some moments with Rita Fiore, but not a sink-or-swim environment like Parker's novel Potshot, which even Parker struggled to manage.

Atkins introduces new characters like Large Marj Phillips in Old Black Magic, art museum manager and hardass, a character totally natural to Spenser's universe. Times have changed, too. Characters have aged. This is to Atkins' advantage because we see thug Jackie DeMarco not as Parker described him but as Atkins must newly envision him with the passing of years. All these realities of a long series of novels about a single character have led to Atkins successfully maintaining the believability of the Spenser characters.

Can the Spenser novels continue to evolve and not become petrified, Atkins slavishly mimicking Parker's art and craft?

The best choice Atkins has made--and that the publishers and editors have allowed him--is that he has chosen to write his own Spenser novels. Atkins is a novelist in his own right. His website says the following: "New York Times Bestselling author Ace Atkins has been nominated for every major award in crime fiction, including the Edgar three times, twice for novels about former U.S. Army Ranger Quinn Colson. He has written eight books in the Colson series and continued Robert B. Parker’s iconic Spenser character after Parker’s death in 2010, adding seven best-selling novels in that series." Reading Crossroad Blues, Atkins' first novel, is to see how Atkins has adapted his skills and styles to the Spenser saga; his has not excised them. Robert B. Parker has praise for the novel: "Crossroad Blues sings. It proves that big guys can write, and that Ace Atkins can write better than most." No, Atkins does not slavishly mimic Parker's Spenser novels. He has found his own voice, and he sings his own interpretation.

In the end, the only way the Spenser tome can continue is if the saga, the characters, and the soul of the novels continue to evolve. Atkins and the Spenser publishers are on the right path. Let me just come out and say it--I enjoyed Old Black Magic more than some of the Spenser novels Parker wrote. It reminds me of some of the earlier Spenser novels, where Parker's style was still more fluid, where his chapters were longer, and where the strict attention to detail and action superseded character. "Just the facts, ma'am." The universe of Spenser now lies in the hands of Ace Atkins. As the saying goes, you built the channel before it rains. Atkins was a skilled mystery novelist, praised by Robert B. Parker, before Atkins ever wrote a Spenser novel. The canal has been surveyed, the channel dug, now let the Spenser novels flow.