3 Quick But Important Takeaways on the Pence-Harris Debate 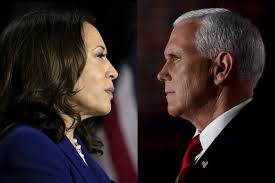 Having watched last night's Vice-Presidential debate between Mike Pence and Kamala Harris and then read commentary on the debate, my initial reaction was the same as journalist and columnist David French from Twitter: "I'm feeling nostalgic. This reminds me of normal debate frustration -- when politicians don't answer good questions and respond with canned mini-speeches. Simpler times."

However, after listening to the debate, thinking about the candidate responses, and reading some commentaries, three points stand out for me regarding the debate and what the candidates said, either verbally or with body language. I think these points will have major negative consequences from various segments of the voting population for the Republican Party. I think these negative consequences will be cementing blocks of voters to vote for the Biden-Harris ticket, even though Pence's steady calmness will reassure some voters.

Pete Buttigieg said on the Steve Corbert after-debate show (at 5 minutes in), "The scary thing is [Mike Pence] is pretty comfortable telling a total lie in a calm, reassuring voice that would make you think that what he was saying was God's honest truth." I think voters will realize that Pence's gift to the Trump-Pence ticket is his ability to calmly state lies that Trump . . . well, trumpets. Pence's denunciation of Harris for saying she wouldn't accept Trump's word that a vaccine for COVID-19 was ready but would also need verification by science is just one example. Pence sidestepped the point--not that science doesn't work, but that Trump is a liar. Another Pence moment related to this: "I think the American people know that this [Trump] is a president who has put the health of America first."

Pence's calm, deliberate delivery worked against him when he attempted to "mansplain" his perspective to Harris and the American people. In a Time magazine piece, "Mike Pence’s Vice Presidential Debate Lecture to Kamala Harris Isn’t Likely to Help Trump With Women," both candidates are called out for side-stepping issues in their answers, but the article notes that Pence's overspeaking and extending his speaking time (and ignoring the moderator, Susan Page), his facial expressions, what he said produced a sense of "condescension and contempt," according to the article's author, Philip Elliott, whose comments in the article about the Trump-Pence ticket's problems with women voters is explained. Another article bashing Pence's behavior and how it will adversely affect the voting of women was The Hollywood Reporter, yes, in an over-stated style that nevertheless made a telling point.

"Pence appeared obnoxious, condescending and not altogether present in the moment as he ran roughshod over the two women on the stage and kept addressing issues the moderator had moved on from. If Trump did his best to get his picture under the definition of 'alpha male' in the dictionary last week, Pence’s portrait might be found under 'mansplainer.'”

The literary term is "foil," a foil being a character in a story that highlights through contrast another character's personality traits and behavior. Pence's deliberate calmness ultimately accentuates Trump's volatility. As Pence spoke about how much Trump cared for the American people, the president had just spent a day tweeting about how pandemic relief was on . . . and off . . . and on--until the obvious truth was seen that no matter what the White House and Vice President thought was happening, it could change in a moment, based on the president's mood. And many are tired of that volatility, senior citizens among them. Retirees in Florida are a good gauge of that fatigue, as seen in articles on the subject.

"He does not seem to care for truth. Truth is very important to me. He does not check facts," one retired man said. Another Florida retiree said, "They’re concerned about his plans for Medicare and social security of course, but they also didn’t allow their children to behave like this, they don’t allow their grandchildren to behave like this, and they’re very much turned off by it." In a Christian Science Monitor article, another retired voter says, "I’ve never seen this level of mishandling my entire life, and I was around during Richard Nixon and Watergate. This coronavirus situation has just highlighted how inept [President Trump] is."

Ultimately, Pence's delivery style in the debate only serves as a foil to Trump's volatility. His demeanor is like the one white iris in Van Gogh's field of purple irises--the one white iris accentuates the saturation of the purple flowers. As we head into the home stretch of the 2020 election, Pence's one debate with his steady demeanor will only emphasize the stormfront of Trump's behavior--and folks are tired of the needless sound and fury.

People will hear and see what they want to, according to their point of view. After four years of White House lies, intolerance, and a stormy president, one solitary debate where the vice president calmly lies, is serenely intolerant, and who denies with wide eyes the storm raging outside--one debate, I sincerely hope, will not change the tide pulling us toward a more sane and civil time. As a final note, as usual, NPR provides an objective, balanced summary of the debate: "4 Takeaways From The Mike Pence, Kamala Harris Vice Presidential Debate." "The vice presidential debate wasn't likely to change many voters' minds or shift the trajectory of the race, but it showed sharp contrasts between the two parties' agendas for the economy, health care and more." Let's hope for a time of more informative reads and fewer diatribes.

Email ThisBlogThis!Share to TwitterShare to FacebookShare to Pinterest
Labels: COVID-19