My wife and I enjoyed Shonda Rhimes' TV show "Scandal," and especially how the show stuck a thumb in the eye of racial bigotry. To discover that a Black man was secretly running the United States for years while all those old white men thought they were calling the shots! And how the Black puppeteer chortles when he confesses all to those assembled old men, daring them to tell the world! Intrigued that Rhimes has produced "Bridgerton," a British Regency era series about early 1800s high society, my wife and I were ready to find out how the producer's outrageous unpredictability would play out, whether Rhimes' thumb in the eye could make it past Britain's stiff upper lip, so to speak.

After viewing the first episode of the series, we are pleased to say that the production has met our expectations--and exceeded them. Yes, the thumb is still there, ready to poke--and as usual it's coated in Rhimes' rich syrup of witty, intelligent grandeur.

First, let's talk about the setting and costumes--this is a lush production. Having seen just the first episode, there's nothing gritty about the show. The rich are very rich, and the lives they lead are excessive and indulgent, fueled by big bucks. Starting 2021 with the beauty of the sets . . . and fireworks and gushing fountains and garden topiary--well, that's a welcome escape from 2020. Next, the writing is quite deft, matching the fast-moving and insightful plotting and dialogue we enjoyed with "Scandal." The love matches and lack of them, the rich, smirking buffoons and the entitled and unaware young men just needing a nudge to get "woke," and the women who really run the show, some well and some not so well--it's all there, a naughtier, more lavish, and romantically suspenseful version of "Pride and Prejudice." 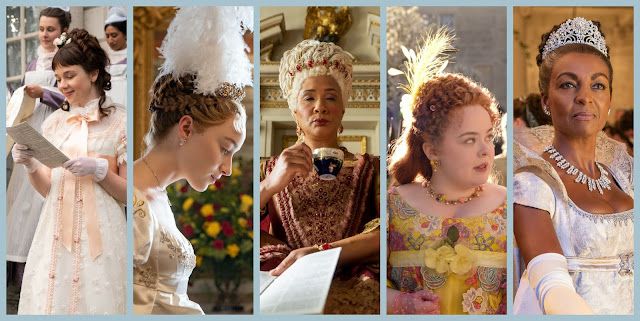 Finally, any consideration of "Bridgerton" cannot exclude Rhimes' casting of people of color liberally into British Regency aristocratic society--not only casting in excessive proportion to historical fact but also scripting the storyline so that no racial prejudicial reactions exist. That was a bold move by Rhimes, and I think it works by both allowing the fantasy to exist and by also making a point by the startling contrast with historical reality. Show writer Chris Van Dusen (in The Oprah Magazine) stated that the show was not intended to be historically accurate but rather "a modern take on a period drama that resulted in fantasy." An Ed Times piece puts it this way: "The tone and attire of the show also remind us of the fact that we may have left behind the enduring whiteness of authors like Jane Austen. Call it a recreation of history or escapist fantasy, the show does represent change and also opens a lot of avenues for other similar possible dramas in the future." I find the inclusion of people of color beyond the historical accuracy of the times is indeed an invigorating "fantasy." It's a subtle, silky poke in the eye, a thumb in the ugly eye of bigotry. Perhaps a Black James Bond is possible.

We're looking forward to more of "Bridgerton," to more romance, intrigue, and period escapism. After seeing the first episode, one of our favorite (or should I say favourite?) characters is plump Penelope Featherington. "Pen" is also an ill-matched character for Regency society--according to those standards, an overweight bookworm who is too quick to display her dazzlingly radiant smile. In the first episode, Penelope is the focus of the snarky bigotry of the times, becoming the perfect foil to the ignored racial bigotries that the fantasy side-steps. Expecting racial tension, we discover a smart, joyful young woman who will probably get along because of her fortitude and despite the prejudices of the times. Well done! And we look forward to more to more ribbons, bows, and knowing Rhimes, probably daggers--real, metaphorical . . . or both. We'll see, won't we!