A Covid Parable, a Parallel Tale 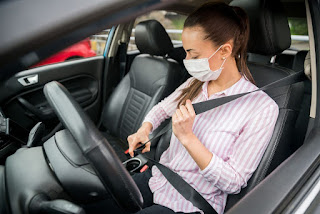 I'm calling this a parable or a tale, but this is actually a true story. It's the correspondences, the connections which make this story resonate beyond its simple premise.

My neighbor for many years was an elder lady who lived by herself. Her husband had passed away long ago, and her daughter was old enough to be a great-grandmother. Margaret was almost ninety years old when she told me this story. Still living independently and driving her car herself, my son and I enjoyed her quiet, steady, unflappable approach to life. Come winter, we would always shovel her sidewalk and driveway for her. Come spring, Margaret always gave me some fresh rhubarb from her backyard for rhubarb coffee cake.

Margaret had driven a car for so long that her driving experience pre-dated the use of seatbelts. Those vintage autos just didn't have seatbelts--and don't even think about airbags.

"For a long time," Margaret told me one day, "I didn't wear seatbelts, even after cars started coming out with them. It wasn't that I didn't believe in them. I'd known people who had been thrown through windshields in a wreck."

The question I asked, of course, was if she knew that seatbelts were effective, then why hadn't she used them . . . and why did she use them now?

"It wasn't that I didn't believe in seatbelts," Margaret said. "It was just this one thing that kept me from buckling up. You see, I was afraid that if I was in a crash, my seatbelt would get stuck, and I would be trapped and die in a fire. I was afraid of burning up in a car fire. That would be such a terrible way to die, and it has happened to people, you know."

"So what changed your mind?" I asked.

"It was just time, really," Margaret said. "More and more people used seatbelts. More and more information and facts came out about seatbelts and how they made you safer. Eventually, I realized that there was no doubt that seatbelts saved many people from dying from automobile accidents. I couldn't argue that."

She said, "I thought about my fear of dying by fire, trapped in a car, and I realized that was a possibility. It did happen. I also came to realize, though, that many, many people died in car crashes. You could almost call it a common occurrence. Being in a car crash, the seatbelt sticking, and then having the car catch on fire and you dying in the fire--now, that was a very rare happening, a very small part of the deaths from car wrecks. I just came to realize that it was much more likely that I'd die in a regular crash than from a fiery crash that I couldn't escape because of my seatbelt. I just had to face my fear and choose the safest course."

Margaret chose the safest course of action, the safer of two possibilities--seatbelt or no seatbelt. She chose to wear a seatbelt while driving. "It took a while for me to be comfortable wearing that seatbelt," she said. "I knew I was safer, though, and that got me past my fear."

Email ThisBlogThis!Share to TwitterShare to FacebookShare to Pinterest
Labels: COVID-19