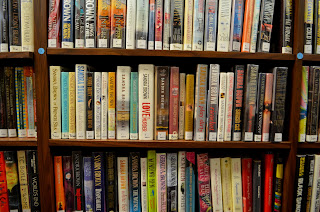 When our local public library closed because of the pandemic, that didn't stop my wife and me from reading. It did affect how we acquired our books, though. I learned how to browse the public library's book list from the online catalog and, thankfully, was able to check out books via their curbside delivery program.

I discussed my online browsing and curbside pick-up in an earlier post: "My Local Public Library Has Only Curbside Service--How I Learned to Browse Online." Learning how to browse for library books online has been a fun adventure, especially when browsing for books my wife might like to read. I've discovered some new sub-genres (such as the "cozy" mystery) and some new authors, in addition to forming what really amounts to my wife and my very own husband/wife book club.

Often, though, an author we discover online has only one or two books from a series that our library has on the shelves. We've had to purchase books, used or new, to fill in a series we are reading. As an example, the author Mary Alice Monroe has written a trilogy set in the Carolinas called the "Lowcountry Summer" series. Our library had the first two books in the series but not the third, which we bought. It also had one book from Monroe's "Beach House" series, so we bought the other books in the series, plus some of Monroe's standalone novels.

Another author whom we've bought quite a few books from is Anna Lee Huber. Huber has written nine books in one series and four in another, and our library had the last book from each series. After researching Huber, my wife and I decided to buy the first book in each series to see how much we liked the writing. We ended up buying all the books in each series--except the last, of course, since our LPL had those two on its shelves.

The question arises, though, of what to do with all those books we've bought, especially since they are "just one time" reads. And the answer, of course, is to donate them to the library!

When I mentioned to the librarian that I had some books my wife and I had bought that filled in missing books from some series that the library owned, the librarian's response was somewhat unexpected, even though on second thought it made perfect sense. She said that not all donated books make the shelves. I knew this, since the library holds regular book sales and even has a section of the library that holds used books for sale.

The librarian also said that even if a book donated completes a trilogy, as my "Lowcountry Summer" example mentioned earlier, the book still might not make it to the shelves. It seems that it would; after all, why not complete the trilogy? What the librarian explained was that if the two books in the trilogy had only been checked out once--say in the last five years--and that once was by me, then rather than completing the trilogy, the two books on the shelves might be discarded and included, along with my donation, to a regular library book sale.

It doesn't really matter to me, though. Either way I am supporting the library, either by improving the quality of the books to loan or by adding to the library's coffers when they sell a book I donated. That makes me happy. As far as I'm concerned, free public libraries are among the most nurturing, positive institutions that were ever imagined. Read on and prosper!