What is Consciousness-based Writing?

On the student’s desk is a written document: a novel, a poem, a play, an essay. How do we determine if the document is consciousness-based, if it is “enlightening” to read?

Whether one looks at the concept of enlightened writing from the perspective of the writer or the reader, the effects of the writing should be the same: leading in the direction of evolution, of growth.

Here is the “big picture” I use in my American literature course at Maharishi School: Consciousness-based literature inspires and instructs the reader by exalting the supreme qualities of life in enlightenment. I use the word “enlightened” to convey the idea that literature should express universal truths that are life-supporting. 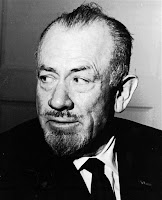 Writer and reader should both benefit or grow from the act of communication.

Let us consider a work that is generally considered to be a classic: John Steinbeck’s Of Mice and Men. This work, published in 1937, was written in the modern age. In American Literature class, we study the qualities of each literary era, and the main qualities of the modern era of American literature were those of conflict and change. The novel reflects this; many call the novel a tragedy.

Is Of Mice and Men a novel that “inspires, instructs, and exalts the supreme qualities of life in enlightenment”? The best answer probably is “yes and no.” The novel reflects both the consciousness of its time and the consciousness of the author; it is a novel that contains equal parts of hope and despair. One can definitely say, though, that for a time that was known for its “loss of innocent optimism,” a time that embodied a mood of “uncertainty, disjointedness, and disillusionment,” a time of fragmentation for the “lost generation,” Steinbeck’s novel does yearn for a better world and does provide a vision of what that world could be. The men in the novel want to own a little farm where they can live in freedom, in peace with one another, and in accord with nature.

The negativity, the tragedy of the novel, is that the workingmen in the novel and even the author, Steinbeck, did not have the techniques to achieve the dream of a better life. For much of the action of the novel, the term “non-example” applies. Along with the vision or dream of a better life, a darker example or possibility is developed. The author seems to say, “I don’t know how to achieve the dream, but whatever you do, don’t do this.” Even with the tragedy of the novel, though, one sees the dream and hopes. Receiving the Nobel Prize for Literature in 1962, Steinbeck said, “I hold that a writer who does not passionately believe in the perfectibility of man has no dedication nor any membership in literature.”

Consciousness-based education provides a unique and timely opportunity for the world because it uses technologies of expanding consciousness, the Transcendental Meditation and TM-Sidhi programs. These technologies have an evolutionary effect on the individual and on society. In the consciousness-based education classroom, the student-writer’s ability to affirm life expands, and the student-reader’s ability to see deeply and profoundly into truths expressed by the writer increases. This is communication at its most profound level: as Maharishi Mahesh Yogi said, “the art and science of creating unity.” For me, consciousness-based literature is writing that believes in the perfectibility of man.

Copyright 2009 by Thomas L. Kepler, all rights reserved
Steinbeck image copyright AP, through licensed agreement with GPAEA
Posted by Tom Kepler at 4:00 AM