Photos of "The Stone Dragon"

Through the magic of the internet, I have connected with a photographer in France.

She has taken photos of medieval ruins in France. She comments: "This was a former monastery for nuns created in 1260... destroyed around 1790. I don't think that they lived in these hobbits caves... just the basements of the monastery!!"

The concept of The Stone Dragon is that a dragon is trapped within the stones of a country manor.  The house becomes the dragon, and the dragon becomes the house.

Dream magic is the most dangerous of magics because it is so difficult to control.  Apprentice mage Glimmer—Not a Glimmer of Magic—realizes this when he discovers that his apparent lack of magical talent is because his magic manifests only when he is dreaming.  His first attempt at dream magery conjures a dragon, and just before dying in dragonfire, Glimmer, in desperation, locks the dragon within the stones of his master’s house.  How, though, do you live in a house that is also a dragon?  And how can you even sleep—knowing that dream might slip to nightmare?

The challenge of the young magician is to learn to settle his mind so that he can manage this situation.

My favorite French photographer has graciously given permission to me to use the above photo and others if I choose to self-publish The Stone Dragon and its sequel, Dragons of Blood and Stone. 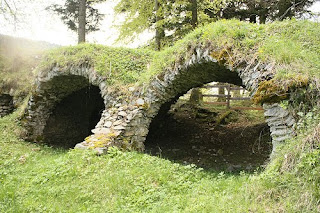 Email ThisBlogThis!Share to TwitterShare to FacebookShare to Pinterest
Labels: dragon, Dragons of Blood and Stone, The Stone Dragon