Comments after Reading The Adventures of Tom Sawyer 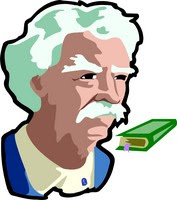 In the past two weeks I read one of the most famous novels in American literature—the Adventures of Tom Sawyer. After reading the book, I noticed something different from what others noticed. I thought in this book, the author wants to show us not only naughty Tom’s adventures, but also kind of how Americans act in the world today.

In this book, Tom is a naughty boy who hates to be limited. At first it was very difficult for me to understand how these actions can be allowed, but then I noticed, in America, most of the people, even like my age, like to do things their own way—and many times against the rules. But now after observing this state of affairs, I can understand why he wants to do so many “bad” things. Little Tom Sawyer is in fact a typical representation of all Americans. If I had not lived in America, I would never have understood the book. When they do things, they never think about the consequences of their actions, they just do it! They think the more limitations there are, the less happiness there will be. So they often do something which might cause some serious problems, but they really don’t want to cause that.


Tom Sawyer also shows the characteristic interest of Americans—to explore. Tom Sawyer lived a happy life at first—at least a safe and peaceful life—but he chose to have an adventure. Many of my friends in America also say that they want to have adventures. In the book, Tom and his friends go out to an island with only a few supplies, but they still enjoy their day of adventure. All the children have curiosity, but during their growing years, that kind of curiosity becomes less and less, and finally almost disappears, through the educational process. Mark Twain, in my opinion, is to show us the children need to have curiosity, and they can learn a lot from adventures.


From this book, I also realized that people can’t fall into the sea of money. Once they fall in it, almost nobody can get out. At the end of the book, Mark Twain describes how people change after they got money. Even Tom Sawyer doesn’t want to give up a life like that. The life full of rules and limitations is just killing people’s curiosity in that way. But Huckberry Finn is an example Mark Twain gives us to show that there are still people who can successfully keep their curiosity. For them, nothing is more important than their freedom. That’s also what Mark Twain wants the children in the future to be.


After reading The Adventures of Tom Sawyer, I not only enjoy the adventures Tom Sawyer had, but also find out much useful knowledge, and become closer to American’s daily life as well. Thanks to this book, I understand many things I did not understand before. Thank you, Mark Twain, for giving us such a great book. If possible, I’d like to read this kind of book again.
Copyright 2010 by the student author, all rights reserved
Permission to use is to be obtained through the student's teacher, Tom Kepler
Posted by Tom Kepler at 5:00 AM