An excerpt from "My First Summer in the Sierra," by John Muir, 1869.". . . to see the behavior of the fall all the way to the bottom": John Muir climbs to the edge of Yosemite Falls 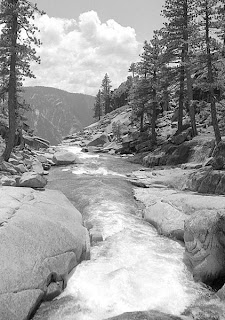 John Muir spent the summer of 1869 as a part of a sheep-herding expedition in the Sierras of California. He was not the herder but more a fellow traveler and overseer, "a man about the camp whom [the owner] could trust to see that the shepherd did his duty." The following passage is about Muir's first experience of the cliffs and streams above Yosemite Valley.

I rambled along the valley rim to the westward; most of it is rounded off on the very brink, so that it is not easy to find places where one may look clear down the face of the wall to the bottom. When such places were found, and I had cautiously set my feet and drawn my body erect, I could not help fearing a little that the rock might split off and let me down. and what a down! -- more than three thousand feet. Still my limbs did not tremble, nor did I feel the least uncertainty as to the reliance to be placed on them. My only fear was that a flake of the granite, which in some places showed joints more or less open and running parallel with the face of the cliff, might give way. After withdrawing from such places, excited with the view I had got, I would say to myself, "Now, don't go out on the verge again." But in the face of Yosemite scenery cautious remonstrance is vain; under its spell one's body seems to go where it likes with a will over which we seem to have scarce any control.

After a mile or so of this memorable cliff work I approached Yosemite Creek, admiring its easy, graceful, confident gestures as it comes bravely forward in its narrow channel, singing the last of its mountain songs on its way to its fate--a few rods more over the shining granite, then down half a mile in snowy foam to another world, to be lost in the Merced [River], where climate, vegetation, inhabitants, all are different. Emerging from its last gorge, it glides in wide lace-like rapids down a smooth incline into a pool where it seems to rest and compose its gray, agitated waters before taking the grand plunge, then slowly slipping over the lip of the pool basin, it descends another glossy slope with rapidly accelerated speed to the brink of the tremendous cliff, and with sublime, fateful confidence springs out free in the air. 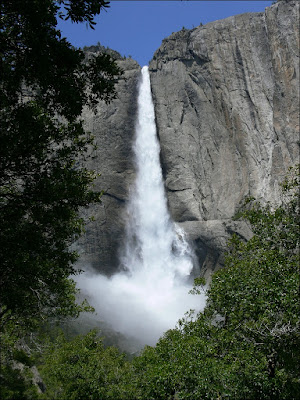 I took off my shoes and stockings and worked my way cautiously down alongside the rushing flood, keeping my feet and hands pressed firmly on the polished rock. The booming, roaring water, rushing past close to my head, was very exciting. I had expected that the sloping apron would terminate with the perpendicular wall of the valley, and that from the foot of it, where it is less steeply inclined, I should be able to lean far enough out to see the forms and behavior of the fall all the way down to the bottom. But I found that there was yet another small brow over which I could not see, and which appeared to be too steep for mortal feet.

Scanning it keenly, I discovered a narrow shelf about three inches wide on the very brink, just wide enough for a rest for one's heels. But there seemed to be no way of reaching it over so steep a brow. At length, after careful scrutiny of the surface, I found an irregular edge of a flake of the rock some distance back from the margin of the torrent. If I was to get down to the brink at all that rough edge, which might offer slight finger holds, was the only way. But the slope beside it looked dangerously smooth and steep, and the swift roaring flood beneath, overhead, and beside me was very nerve-trying. I therefore concluded not to venture farther, but did nevertheless. Tufts of artemisia were growing in clefts of the rock near by, and I filled my mouth with the bitter leaves, hoping they might help to prevent giddiness. Then, with a caution not known in ordinary circumstances, I crept down safely to the little ledge, got my heels well planted on it, then shuffled in a horizontal direction, twenty or thirty feet until close to the outplunging current, which, by the time it had descended thus far, was already white. Here I obtained a perfectly free view down into the heart of the snowy, chanting throng of comet-like streamers, into which the body of the fall soon separates.

While perched on that narrow niche I was not distinctly conscious of danger. The tremendous grandeur of the fall in form and sound and motion, acting at close range, smothered the sense of fear, and in such places one's body takes keen care for safety on its own account. How long I remained down there, or how I returned I can hardly tell. Anyhow, I had a glorious time, and got back to camp about dark, enjoying triumphant exhilaration soon followed by dull weariness. Hereafter I'll try to keep from such extravagant, nerve-straining places. Yet such a day is well worth venturing for. My first view of the High Sierra, first view looking down into Yosemite, the death song of Yosemite Creek, and its flight over the vast cliff, each one of these is of itself enough for a great life-long landscape fortune--a most memorable day of days--enjoyment enough to kill if that were possible.


My First Summer in the Sierra was downloaded as a free ebook from Project Gutenberg.


Rights for Muir's book are now in the public domain.
Posted by Tom Kepler at 5:00 AM