We have the need to be whole, to be connected, to live life with joy. Personal experience and scientific research testifies that Transcendental Meditation is a simple, effortless, natural technique that allows the individual to tap into one's inner potential in order to live life as a more integrated, complete individual--to simply be more completely our own self.

I am providing an excerpt from guest blog delanceyplace.com that highlights our human need to live an integrated life, in touch with ourselves and the world. 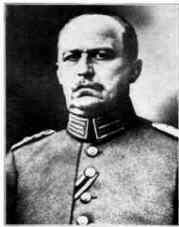 In today's excerpt - war and loneliness. During the final years of World War I, Eric Ludendorff, a protege of Otto von Bismarck himself, was the commanding general of all German armies. His grandiose military plans had failed repeatedly, he had presided over ten million casualties, and in 1918 his forces had begun to rapidly disintegrate:


"Things had never gone so badly for Eric Ludendorff, or gone badly in so many ways over such a long period as they did in 1918. As his problems mounted, he grew visibly fragile.

"All his life he had displayed an insatiable appetite for work, but now his staff noticed him slipping away from headquarters without explanation. A member of the medical staff, writing of Ludendorff, would recall that at this juncture 'there were reports of occasional crying episodes.'

"Officers who served him became concerned for him personally and about his ability to function. Quietly, with considerable trepidation, they arranged for a psychiatrist who knew Ludendorff, a Dr. Hocheimer, to visit and see what might be done.

"Everyone was on pins and needles the day Hocheimer arrived, wondering how he was going to approach Ludendorff and how the general was going to react. Ludendorff was a stiff, distant man with no visible sense of humor and firm control over all emotion except the rage that could break out in moments of intense stress. An ugly explosion was by no means out of the question. What happened was more unexpected than that. It revealed the depth of Ludendorff's neediness.

"He was predictably impatient at being interrupted but consented to see the doctor. 'I talked earnestly, urgently and warmly, and said that I had noticed with great sadness that for years he had given no consideration to one matter - his own spirit,' Hocheimer recalled afterward. 'Always only work, worry, straining his body and mind. No recreation, no joy, rushing his food, not breathing, not laughing, not seeing anything of nature and art, not hearing the rustle of the forest nor the splashing of the brook.'

"Hocheimer urged a move from Ludendorff's cramped quarters at Avesnes back to the more pleasant accommodations at Spa in Belgium. He recommended walks, breathing exercises, and a change in routine calculated to induce relaxation and the ability to sleep. Ludendorff followed these instructions conscientiously, even eagerly. As long as he continued to do so, his torments eased. He and Hocheimer continued to confer. The doctor's ultimate diagnosis: 'The man is utterly lonely.' ...

"Ludendorff was especially close to the youngest of his stepsons, who happened to share his first name. In March 1918 he received word that young Erich, still a teenager, had been shot down behind British lines, his fate uncertain. Not long afterward, with German troops advancing across France in the Michael offensive, Ludendorff was told of the discovery of a fresh grave. Its marker said, in English, 'Here rest two German pilots.' He went to the grave and had the bodies dug up. One was Erich's. It was temporarily reburied at Avesnes while arrangements were made for its transfer to Berlin.

"That was where Ludendorff was going when he began to disappear from headquarters: to brood at Erich's grave. That was when an army doctor heard 'reports of occasional crying.' Nothing could ever be the same. [His wife] Margarethe was broken, permanently in the grip of depression, grief, and fear. Ludendorff, in own words, felt that the war had taken everything."

About Delanceyplace:
Delanceyplace is a brief daily email with an excerpt or quote we view as interesting or noteworthy, offered with commentary to provide context.  There is no theme, except that most excerpts will come from a non-fiction work, mainly works of history, are occasionally controversial, and we hope will have a more universal relevance than simply the subject of the book from which they came.


All copyrights reserved by the G.J. Meyer and delanceyplace.com
Image from HistoryontheNet.com
Posted by Tom Kepler at 5:00 AM