The Transcendental Poetry of Rumi 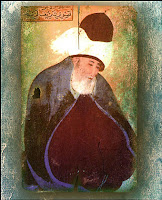 Rumi, the great Persian poet who sang the unbounded, universal nature of consciousness, still sings today, his poetry part of the great literature of the world.

Dr. Craig Pearson, Executive Vice-President of Maharishi University of Management, a university where the students, in addition to their academic studies also practice the Transcendental Meditation program, has written an interesting article about this mystical poet and the experience of transcendental consciousness.


Rumi -- "I have passed beyond all thoughts"

Rúmí is telling us about a state that may appear to be sleep from the outside — but deep inside, he says, “my heart is awake.” This is the opposite of what people ordinarily experience, he says — they are awake on the outside, but inside they are “sunk in slumber.”

Is he thinking quietly about something? No — “I have passed beyond (all) thoughts,” he declares. With a series of vivid images he strives to draw the contrast between this state and ordinary experience.

Then what is he experiencing? “The opening of the door (of Divine grace),” he says. A few lines later he calls it “(a state of spiritual) freedom.” This state lies higher than “the seventh sphere (of Heaven).” At the end he declares, “This is the reality.”

Readers familiar with the Transcendental Meditation technique will recognize that Rúmí has transcended the thinking process and is experiencing what Maharishi calls pure consciousness, unbounded awareness.

I really appreciate how in his blog article Dr. Pearson describes the "mystical" experiences described by Rumi in such a straightforward manner--as a state of consciousness that is available to all people and that is being studied by science.

Dr. Ali Arsanjani translates Rumi's poetry and has a Facebook group, Rumi Poetry, that discusses and displays all things Rumi.

If this self is not my True Self, then who is the True Me?
Who is it that utters "it is not I!" through my lips?

I know my self is but the clothing that covers
But then, who is the Self that I am covering?
(Translation by Ali Arsanjani)

Dr. Pearson mentions at the beginning of his article that Rumi has been described as "the most popular  poet in America." After eight hundred years of appreciation for this man's poetry, I think we can say Rumi has written of the ancient and enduring possibilities of our human experience.