Privacy and the Inner Writer: or the power of the man from Porlock

Beware the man from Porlock!

My wife told me yesterday that because she had been writing an important paper at work, she had engaged her phone message saying that she was out of the office. The company's global CEO had popped into her office with a necessary request, and had asked about the phone message--since she was obviously in the office.

The reply was that she needed to focus totally on her writing and not be distracted.

Like my wife, I am finding that my life as a businessman, the marketer of my writing, can seriously interfere with my creative writing attention and time.

The most famous literary story I know about this situation regards Samuel Taylor Coleridge and "the man from Porlock."

According the the story--and there is evidently some debate on how much of the story is fictional--Coleridge had taken some opium for medical reasons (opium was not a prescribed drug in those days), dreamed, and then woke to write the poem "Kubla Khan"--based on a reaction to Samuel Purchas's Pilgrmage: "In Xanada did Cublai Can build a stately Pallace . . ."

He was interrupted mid-poem by a knock on the door--a man from Porlock--and the poem shows this break, the first part a powerful flow of dramatic narrative and description, the last half an attempt to capture the memory of that poetic vision. The poem works quite well with its two parts, but what would the poem have been without the interruption? The original vision was for 200-300 lines, of which 30 were written before the man from Porlock's interruption. The entire poem is 54 lines long. 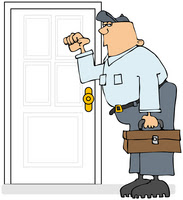 Different writers have different tolerances to noise and bustle while writing. For me, it is not the noise--I can ignore that. It is the interruption, the knock on the door. Louis L'Amour once said in an interview that he could write anywhere, even beside a noisy freeway. Some can't.

I am coming to cherish my early morning time--the time before the world wakes up. It is a private time, a time of beginning, of dawn. I have also found myself writing more on my mini-computer--disconnected from the internet. There is some inconvenience to this--instant research--but also the security of not interrupting myself with some idle, lazy, digital ramble.

It's a paradox: One must write in order to be a writer. One must market to be known as a writer.

The more I "market," or at least interact socially online, the more I sympathize with those writers who have a reputation for being curmudgeons or recluses.

The body can hold the door open only so long before that ultimate opiate leads us through, never to return and write under our current pen name.

Copyright 2011 by Thomas L. Kepler, all rights reserved
Posted by Tom Kepler at 6:08 AM