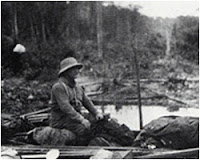 Theodore Roosevelt, after two terms as president of the United States, runs for a third term on the maverick Progressive Party (Bull Moose) ticket. He loses in a lopsided victory to Wilson and is at loose ends politically and personally.

An avid outdoorsman and accomplished amateur naturalist, Roosevelt agrees to an expedition to gather specimens for the American Museum of Natural History, heading a party that includes several accomplished naturalists--and joined by Brazilian explorer and soldier Colonel Candido Rondon and Roosevelt's son Kermit, an engineer in Brazil. The safely planned expedition morphs into a trip down an unexplored river, the River of Doubt, with great dangers, lack of expert preparation, and liabilities of personnel.

Author Candice Millard chronicles this expedition in The River of Doubt: Theodore Roosevelt's Darkest Journey, taking journals, reports, diaries, and interviews and transforming them into an account that is half journalistic and half research-based narration--a great balance of dramatic story-telling and objective non-fiction.

I read this account with a concurrent reading of Roosevelt's Through the Brazilian Wilderness, his account of the expedition, downloaded for free from Project Gutenberg to my e-reader.

From Through the Brazilian Wilderness:


"On February 27, 1914, shortly after midday, we started down the River of Doubt into the unknown. We were quite uncertain whether after a week we should find ourselves in the Gy-Parana, or after six weeks in the Madiera, or after three months we knew not where. That was why the river was rightly christened the Duvida."

Switching from book to book and seeing events through both Roosevelt's eyes and Millard's research was a rich reading experience: Roosevelt's straightforward statements such as that he gave away his last spare pairs of shoes and pants to expedition members, and Millard's careful explanation of why shoes would rot away in the jungle and pants be ripped to shreds.

In The River of Doubt, Millard narrates:


"Roosevelt watched as the jungle glided past him, its towering trees and blue sky reflected, like a trembling, inverted world, in the water's dark surface. He drank in the rich array of beauty, admiring the many-colored butterflies that 'fluttered over the river,' and marveling at how the spark of sunlight could cloak the electric green jungle."

Such a synthesis of direct quotation, paraphrase from original texts, and creative investment of background geographical knowledge provides a fascinating reconstruction of the Roosevelt-Roncon expedition.

To quote from the book's back cover:


". . . Roosevelt and his men faced an unbelievable series of hardships, losing their canoes and supplies to punishing whitewater rapids, and enduring starvation, Indian attack, disease, drowning, and a murder within their own ranks. Three men died, and Roosevelt was brought to the brink of suicide."

Reading Roosevelt's Through the Brazilian Wilderness concurrently with The River of Doubt provides a useful balance to Millard's narrative. Roosevelt's account is presented in an objective tone, seeking scientific distance rather than drama. Insights into Roosevelt's character are gained from reading his account of the expedition. His account ends, for instance, with an itemization of the food, clothing, and exploration and scientific equipment taken on the journey.

It is Millard's account of the expedition and its historical context that really provides a full understanding of Roosevelt's journey into the wilderness. By accessing the journals of the other members of the expedition and by providing background information that fully informs the reader of the dangers of the journey (in contrast to Roosevelt's account which focuses the naturalist's perspective), a more complete picture of this expedition at the 20th century's beginning can be appreciated.

In Through the Brazilian Wilderness, Roosevelt writes: "The true wilderness wanderer . . . must be a man of action as well as of observation. He must have the heart and the body to do and to endure, no less than the eye to see and the brain to note and record."

In the meantime, we can read about the true exploits of Teddy Roosevelt, man of his times, American president, and wilderness wanderer.