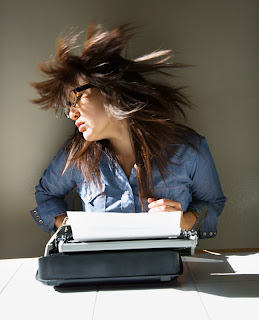 Having an idea is always the first stage of writing.

Writers approach getting a good idea in diverse ways. In Writing Down the Bones: Freeing the Writer Within, Natalie Goldberg suggests buying a notebook and just filling it--top to bottom, edge to edge--and with the volume of words, ideas will finally coalesce into a project or projects. Others suggest jotting notes as good ideas come. This is what I do; then, of course, I have to keep track of the notes! Brainstorming (a rather scary term, if you ask me) is recommended by others--a sort of blend of writing freely without focus and jotting.

Once an idea or project is selected, then supporting ideas must be developed. For me, this is a very organic and fluid experience. I feel the story inside me in its wholeness, don't focus too much on the specifics, and then when I sit to write, the specifics and details just open up. It's not that I start without an idea; it's more that I know what's inside the box, so I don't feel the need to make a detailed inventory prior to using the contents. However, in all fairness, I do sometimes jot down notes for an entire passage, a sort of informal outline. I did that for the "Gnome's Quest" chapters of The Stone Dragon, which were added to the second draft of the novel. A recent short story set in the Dragons of Blood and Stone series, "Cobb's Dragon," was informally outlined prior to writing the 2,500-word story.

People have different learning styles or "intelligences," so it is important to gain familiarity with what works for you. Once you find your style of working, then successfully using that style or those strategies should add to your confidence and competency as a writer. 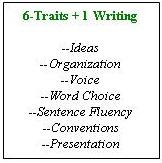 its program says that ideas should be clear, focused, hold the reader’s attention, relevant, accurate, written from knowledge or experience, and should consider the reader and be insightful.

Ranier Maria Rilke, from his Letters to a Young Poet, said that everything we write on paper comes from within us. Our first step as a writer is to contact that source of ideas within us. After that we must put those words on paper as elegantly as we possibly can.

Although good ideas can come at any time, I think it's a good idea to give ourselves a break. We should take care of ourselves as best we can--be rested, healthy, and unstressed. I practice the Transcendental Meditation program. That helps. I also take regular breaks when I write and bike ride, work in the garden, chop firewood, wash the dishes--engage in some physical activity.

Not being fatigued or frazzled, then when idea bubbles to the surface, it's not lost in the froth created by 10,000 monkeys beating the water with sticks.

Another thing I believe is that we should write regularly. We can get into a habit of using our creativity if we regularly engage in creative pursuits. A sort of channel is formed that allows our creativity to flow more easily. In sports, the term momentum is used; being on a roll is a good thing. In addition a dull piece of writing can be revised, but a blank piece of paper is just there, austere and intimidating.

Writer's block isn't something I experience often, if at all. It does remind me, though, of that story regarding American pioneer Daniel Boone (of which there are several versions). Asked if he had ever been lost, Boone said, "I've never been lost, but once I was a mite confused for a few weeks." I can always write, but there are times the writing seems flat. I keep on writing, having confidence from experience that all will work out in the end.

The most straightforward definition of a writer, after all, is one who writes. Everything after that is the cream on the peaches.

“Perhaps it will turn out that you are called to be an artist. Then take that destiny upon yourself and bear it, its burden and its greatness, without ever asking what recompense might come from the outside. For the creator must be a world for himself and find everything in himself and in Nature to whom he has attached himself." Rainer Maria Rilke

“Having created the creation, the Creator—Cosmic Creative Intelligence—entered into it.” Taittiriya Upanishad 2.6.1

When we write, we are engaging in the same process that created the universe--same process, different scale. I think that is why making stuff up--or figuring stuff out--is such a powerful experience. When we create, we touch the divine.

Samuel Johnson wrote: "No man but a blockhead ever wrote, except for money." Johnson made a living from his writing--but he wouldn't have accomplished that if his writing, publishing, and marketing ideas hadn't been innovative and in touch with the creative imagination of his time.