"Wally, the Door Greeter": a story inspired by the opening of a super Wal-Mart in my town 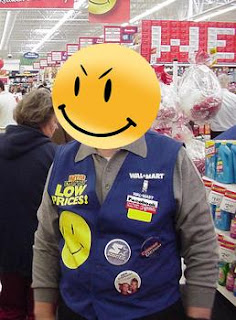 Shopping carts were rattling down the aisles of the Super Wal-Mart's grand opening, serious folk in blue aprons bustling about to assist the shoppers.

The Manager noticed an empty space at the front of the store, though, where all the carts were supposed to be, all slid one inside the other in rows of neat readiness like dollar bills in a wallet.

"Wally," the Manager said, "you need to hit the parking lot and grab some carts. We're running low."

"I would prefer not to," Wally said in a perfectly deadpan manner.

The Manager was somewhat put off by the negative response. After all, the store would provide "70 new jobs, savings for local shoppers and an increase in tax revenue to support the area’s economy," according to the corporate website," but the Manager was busy, assumed Wally had good reason, and sent another blue-boy off for the carts.

Later on opening day, the Manager suggested to Wally that he separate some of the carts so that customers could easily grab them and roll off to consumer bliss.

"I would prefer not to," was Wally's response.

"But it's your job to be jolly and offer a cart," the Manager replied.

"I would prefer not to."

The afternoon progressed with conditional negatives, Wally doing nothing but staring out the window, customers muttering, "You can't fire him! Remember the baby movie Where the Heart Is!"

This was Wal-Mart, after all, and there were standards. The day ended with Wally sitting on one of those benches set in concrete in front of the sliding entrance doors. Wally might as well have been set in concrete.

The Manager tucked some stale french fries into the crook of Wally's arm, then turned to his car to leave for the night. A chance thought, and he returned to Wally and whispered in his ear, "Tomorrow we'll put you in charge of the Lost and Found department."

Wally made no response. The Manager was heartened, though, and decided the absence of the negative could be considered a positive. He would prefer to think so, anyway.

This story was suggested by "Bartleby the Scrivener," by Herman Melville.

Copyright 2012 by Thomas L. Kepler, all rights reserved
Posted by Tom Kepler at 6:49 AM