The Eyre Tennis Center was dedicated, June 6, 2012, by Maharishi School of the Age of Enlightenment and Maharishi University of Management. The indoor tennis courts are located in the university's recreation center. Speaking at the dedication were former members of the school's tennis teams, appreciative parents, state tennis officials, Fairfield mayor Ed Malloy, and administrators from MSAE and MUM.

Lawrence Eyre's coaching achievements included being awarded in 2009 the United States Professional Tennis Association's (USPTA) High School Coach of the Year award. This recognition is awarded to only one high school coach per year, regardless of the school's size. (More information and video here.)

Coach Lawrence Eyre's achievements were quoted in the dedication handout:
Speakers at the dedication of the tennis center were from the local Fairfield community and from across the state of Iowa.
The comments of many of the speakers echoed the comments of Coach Lawrence Eyre, spoken in a videotaped interview played at the dedication. "A well-rounded tennis experience leads to a well-rounded life experience." Eyre also commented on his coaching experience in the dedication's handout: "I am retiring with a deep sense of fulfillment, and with gratitude for the growth that 25 years of coaching high school tennis has brought me."

Mayor Ed Malloy then went on to "pop the cork" on a new can of tennis balls, and the Eyres played the first round of tennis on the newly dedicated courts. 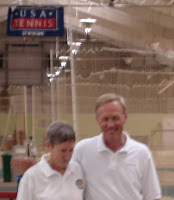 Laurie Eyre will continue to work at Maharishi School as a mentor to new and continuing teachers.

Head of School Dr. Richard Beall ended the dedication ceremony by saying, "The idea of giving you to the world is wonderful news."


Copyright 2012 by Thomas L. Kepler, all rights reserved
Posted by Tom Kepler at 6:55 AM