The Personal Memoirs of Ulysses S. Grant: a book review 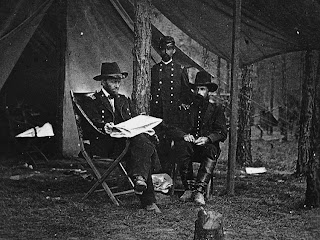 It seems appropriate to review on July 4 the Personal Memoirs of Ulysses S. Grant, a man key to maintaining the unity of the United States.

Anyone interested in the Civil War should listen to the voice of the general that engineered the defeat of the Confederacy.

The free e-version that I read came in two volumes (links: One and Two), the first beginning with Grant's childhood, education, military service in the Mexican War, and ending about halfway through the Civil War. The second completes the Civil War and the surrender of the Confederacy. (E-book users other than Kindle can download this book in other formats at Project Gutenberg.)

There's something special about reading a firsthand account of such a great event, written by one of the primary shapers of that history. Grant also writes in an objective style, relating the events in a straightforward manner, never tooting his own horn. In fact, one belief he expressed several times in his memoirs is that he considered it disreputable for a military officer to seek promotion. He felt it should be given because of the officer's competency.

This is what I learned by reading Grant's Memoirs:
Small details that Grant explained created a greater understanding of the man and the times. For instance, at Appomattox, Grant was not dressed in a travel-dirty uniform to make a statement. He had been with the troops and had come straight to the surrender site as soon as he received the news from Lee. Another detail was how a field commander was removed from his post--not because he was not competent but because the commander was best at defense and Grant needed a commander who was good at pursuing a fleeing enemy.

I suggest if you read Grant's Memoirs you first find a source of maps. I believe that will enjoyably slow down your reading, providing the opportunity to see the movement of troops, the length of marches, the strategy of attack and siege.

I wrote an earlier article of the Memoirs when I had read only through the Mexican War. In it I provided some quotes and observations that may be useful if you still haven't made up your mind if this is a read for you.