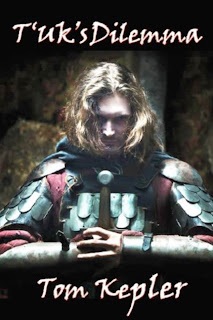 The 4th of July is a celebration of a declaration of freedom, of fighting for a cause and defending what we believe in.

One of 3 short stories that I am offering for free this July is called "T 'Uk's Dilemma." At a little over 1,000 words, the flash fiction is a look at two of the characters in the novel The Stone Dragon, the Tucker brothers.

They are a tragi-comic pair of brothers who, out in the middle of nowhere, own two inns, each on the opposite side of a stream, and who compete for business with one another. "T 'Uk's Dilemma" explains how their eccentric behavior came to be and precedes The Stone Dragon chronologically.

T 'Uk finds himself torn between a warrior's obligation and the Way of the Sisters of Hospitality, a tradition in which his mother had raised him. Also, in The Stone Dragon, some characters practice the Silence of the Saints, a form of meditation.

Having practiced Transcendental Meditation most of my life and seeing how effective TM is in dealing with Post-traumatic Stress Disorder, the short story is a study of just how life-changing the stress of violence can be to the mind. I tried in the story to find a metaphor to convey the fracking a mind can experience by overwhelming events.

This short story and two others are available for free now at Smashwords: Who Listened to Dragons, Three Stories.
Posted by Tom Kepler at 4:43 PM