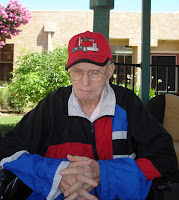 Mom and I entered Dad's room, wondering what his extended-care existence would be like today.

He sat in his wheelchair, alone in the room, staring at nothing--half-asleep, he said.

We sat with him, asking how he was doing. Even though it was scheduled to be somewhere between 105 to 110 degrees in temperature, Dad said he was cold. We pulled the blanket that wrapped his shoulders more tightly around him. We put on his brown cotton jersey gloves.

He had, we found out in the course of our early conversation, eaten a big breakfast, including three fortified milkshakes, which broke the facility's record. This we found out later, was not exactly accurate. He had drunk one milkshake and eaten hardly anything.

He didn't want to go outside or for a "roll" through the corridors, so Mom and I sat and watched Dad doze. "Is he asleep?" Mom asked me. "Almost," Dad replied.

"We're getting out today," Dad said. "We're just going to roll right out the door. I want to go home."

"When you're strong enough to stand and move some on your own. When you are eating."

"I couldn't even get you in the car, Dad. You weigh too much, and I can't wheel you home in the wheelchair. It's too far."

"That's true," Dad said, "so let's use the car." I didn't respond, caught between agreement and disagreement.

"Let's just sneak out," Dad said. "Nobody's paying attention. The door's right there. Now's the time, let's do it!"

It was really tough when Mom and I said good-bye and left. Why weren't we taking him? Why did he have to stay? So what if he couldn't stand or walk--he'd get into the car somehow. Just get outside and go for it!

I can't say I don't understand. I absolutely do. I'd want to get the hell out of Dodge, too. Quality versus quantity is a killer issue.

When is it time to leave the body? When is the appropriate time to go? Aren't we supposed to help the sick and elderly and keep them living? When my dad says in his lucid moments he's "all washed up" because he can't remember, stand, walk, or feed or clean himself, is it despair or accuracy?

I have no answers, except for the legends of saints, mystics, and medicine men who say, "It's time to die," and then lie down (or sit up) and do so. It would be best that it be that clean and simple, but that would require--from whatever spiritual or scientific perspective--to be a whole or complete person, self-actualized in the highest sense.

Most of us are still standing in line, waiting for our ticket to be punched. I hope mine gets punched before it punches me.

In the meantime, I help keep my father comfortable, respecting and noting the times he recognizes his situation, yet I also allow that miracles happen, that he might wake up one morning, say, "I'm hungry," eat, and then ask for physical therapy. I respect his signed declaration to be allowed to pass with dignity. I understand responsibility can be complex.

The thing is, I don't have control over this situation, nor does the care facility, nor does my father, although he has the most individual control. Nature has the greatest control, and I hope to have the wisdom to accept that the power that wears down mountains also acts upon those who climb them.

By the grey hair upon my head, I am sobered by this reality. Don't ask anything of me beyond that awareness.