A Day Out with Mom #18: anger and demons 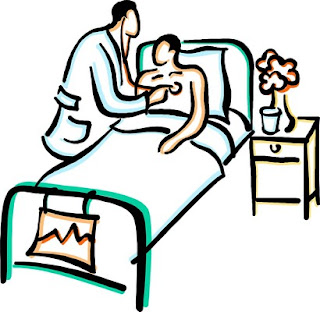 "You take care of my son," your grandmother said to me when I married your dad. And then years later she told me, "I think you're the only one who really understands Harold." I think she was right. Your dad wasn't an easy man to understand. He had his demons, you could say.

When he was in the airplane wreck in Alaska, he was in a body cast for over a year. He worked with checking out the instruments in the planes, and he was doing that with some Russian women pilots. They spoke no English. They wrecked the plane and threw Dad all over the inside, up and down. He's never liked being kept down ever since. I think that's why he rips his IV's out when he's in the hospital. That's why he fights with the nurses and doctors to get out. That's why he has unhappy times in the rest home.

Once when you were little, he had terrible pain in his back and went to the VA hospital to see about it. I don't know what happened, but he didn't get help. He came home so angry that he took his uniform and dogtags, put them in a pile and burned them. Then he took the ashes and the tags and buttons and threw all that away. Later, he was mad at me and said I'd given his dogtags to you kids and we'd lost them. I had to tell him about what he'd done. He didn't even remember. He'd have spells, and I was glad when we got our first TV because he could sit and relax.

Yes, he's had this great anger his whole life. You didn't see it so much because you were quiet and wouldn't argue. And you read. It isn't easy to argue with someone who's got his nose stuck in a book. Your aunt once told me, "My dad was a good father and teacher, but he was never very nice to Harold." When your dad was little and learning his times tables, your grandpa would slap him on the back if he got it wrong. He was a hard man sometimes. Grandma was quiet like me but when your grandpa and dad and his brother got going, she'd just say, "All right, I've had enough. You all just stop this right now," and they would.

I had to do the same thing with your dad early on. I told him, "I won't live like this, and if you can't control your temper, you'll just have to go somewhere else. I'm not going to be married and live like this." He learned that he might be angry about other people and things, but he couldn't bring that anger home. Oh, he'd complain and talk about it, but he wouldn't be angry to us because of other things. That's how I'd work with your dad, especially when you kids were young.

I remember, though, when you were sixteen and went to that party your job had at the lake--with the boss's son who bought a keg! You came home drunk and went to your room. Your Uncle Harry and Dad and I were in the patio talking when you came home. Dad went in to see how things had gone and realized you were drunk. He said something, and you screamed and hollered and told him off. Dad didn't know what to do, you were always so quiet, so we decided to let you sleep it off. You were home safe, anyway. Thank God for that! I remember my brother trying not to smile and then saying he'd better be going. I bet he laughed all the way home, and you were sick like a dog the next day, its own punishment.

Your brother and sister didn't have it so easy, though. Your sister was a lot like your father. She'd argue with him and they'd go round and round. That's why she quit high school in the last half of her senior year. She wasn't going to take it anymore, she said. It was both their fault. They just couldn't get along until many years later. We helped her, though, and loved her.

Pat was quiet and didn't like to argue. He'd take it all inside. Your sister would tell your brother when he was little, "Now, talk and I'll give you some food." He'd just look at her and not say a word. Once Pat told me that at a Little League game he made an error. Dad told him, "You lost us the game." Pat just went home and ran down to the corner of our lot where you boys had made a little fort. He stayed there for a long time. I never knew that for many years. I don't know why your dad said that or did the things he did. He was a loving man who did so much for you kids--took you camping, coached Little League, helped with Cub Scouts. He had these spells his whole life. Sometimes we're in control, sometimes not as much as we'd like, looking back later. Your grandpa was like that some, too--high-spirited, you might say.

He did things I didn't agree with--come home with a new car or something. I never said anything, though. My job was to take care of the house and you kids--and Dad. I did that, and Dad always gave me what I needed, no matter how hard he had to work or how many jobs he had to have.

When we were married and had your sister, the hospital would call and ask me to work. They wanted me to work three days a week. Your dad was gone on the road, though, driving truck. My parents would come down from Greenville to stay with me, especially when I had all three of you. Your Grandma Kepler told me, "You've got three children, Betty. You let Harold take care of the money. You've got enough to do."

Your dad would change jobs pretty often. He'd get mad at something, say someone wasn't being fair, and up and leave. He could always get a job as a mechanic because he was so good. All the shops also knew that he'd bring his own customers with him, people who would only let Harold work on their cars. I think that was why he was never a shop manager, something he always wanted. He had the know-how to figure out what was wrong with the car. He just couldn't get along with people that well.

He liked to go camping up in the mountains. It was quiet there, and with just us it was easy and relaxing. I think that's why he's so angry now--too many people. And when you get old and tired, things you could hide or hold back when you were younger just slip out. It's like you're too slow to stop them.

You'd better watch out! I'm going to be ninety in a little over a year, you know. Dad's doctor says that when you hit ninety, you might say and do anything. I feel sorry for your dad, but there were some things that he never could take. I helped him all these years, and now he has to do some things on his own, just when it's hardest for him to do.

That's not fair. I think and think about how to fix it, but I can't think of anything to do. It's just the way it is. Sometimes life is like that.