A Day Out with Mom #19: engagement and marriage 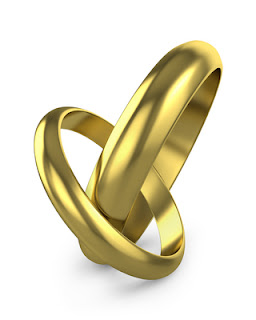 I met your dad at a dance at Robinson's Corners. He came with your uncle, who was about sixteen then. Your dad was just out of the service.

We danced a few dances, and he came over to my parents' place later to see me . I was working at the county hospital then. Finally he told me that he wanted to marry me but had been married before. I talked to my mom about it, and Mom said, "I don't know if I want you getting mixed up with anything like that."

I'd fallen in love with him, though, so on Thanksgiving I went to meet his mom and dad. I guess I made an okay impression because we decided to marry. We were engaged for a year. During that year we planned and saved for our start together.

We married in my church, the First Christian Church. Your dad's family, as you know, are Methodists. I had eight bride's maids. It was common then to have that, and I also didn't want to show preferences to any of the nurses I worked with. I didn't want to hurt anybody's feelings.

I weighed ninety-eight pounds the day I was married. Your dad and I never did anything before we were married. My momma would have killed me if I did, and I didn't do that kind of thing anyway.

We rented a little cottage from a bookkeeper at the hospital, Sophie. She was alone and had a little place behind her house. We drive by that spot now when we go to the drugstore. You know the place? She had the shakes from an accident when she visited her sister up in the mountains. A buck during rutting season charged her and hit her really hard, and there must have been nerve damage or something. Your dad and I were like her kids. I think we paid twenty-three dollars a month for rent.

The whole family got together to fix the place up. My Aunt May helped with the floor and the curtains. We didn't have much money, so we had paper curtains from World War II that had been used to save cloth for the war. Dad and my brother and I painted. Even Dad's sister Helen came over to help.

We traveled around in Lake County on our honeymoon, and my dad stayed at our place to make sure nothing was stolen. We'd saved our money and had a new sofa and chair. It was a clean place and so pretty--our first home. Dad would help Sophie, too, sometimes because she was all alone.

Somewhere Dad had gotten a big tent that he set up to use as a garage. Inside that tent he had a Ford coupe convertible he was fixing up. He took it all apart, cleaned it, and then put it back together. Piece by piece he'd work, and I'd sit and watch him. He painted it beautiful creme and green colors.

Your Aunt Helen would bring over Laurie, and the girls would play together. Those were the wonderful days of our marriage when we were young and so full of life. Our parents were alive and healthy. We were young and in love. We had a little baby. When your sister was a year old, I dressed her in pink and took her to the hospital. The nurses all passed her around. I remember the head nurse who was so strict. She just tucked your sister in her arm, and I thought she'd never give her back. Chenel just jabbered and jabbered her baby talk. She was such a happy child.

Your dad and I have been married sixty-seven years now. All those good years. I can't really even say any of them were bad, even though there were rough times we had to go through. Your dad always had a job, though. He always brought money home and took care of me and you kids. He didn't drink. Oh, he'd have a beer sometimes but not very often. He gave up smoking in the sixties after I told him, "Smoke then if you want to die."

Love is the best thing to take care of anger. It's like your Grandmother Kepler said: I know your dad better than anyone else. He feels lost now and doesn't even know where he is. The other night he called and said, "Come and get me. I'm up here at the casino and need a ride home." He told me he doesn't like it where he is and wants to come home.

I don't think he's going to live much longer. It makes me so sad I cry and cry. That's why they told me to stop coming every day to see Harold. They say it won't do your dad any good if I die first. Who knows, though? It's all in God's hands. God gave us many good and wonderful years together. There's been more good than bad, and I'm happy for every day I have left with your dad, however many they may be.