Book Review: The Day of the Beast 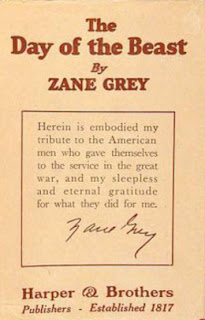 The Day of the Beast is the darkest novel that I've read by Zane Grey. It is also the least enjoyable.

I believe, though, that Grey did not write the novel to please but to educate his readers as to what had gone wrong with American society, and that is the novel's downfall. Through dialogue, character introspection, and downright direct statement, Grey's philosophy interferes with the advancement of the novel. He tells rather than shows, leaving little for the reader to ponder or discover.

The basic storyline is that a soldier, wounded in World War I, returns home to find the people he knew and the society within which he was raised changed for the worse. The details of his Post-traumatic Stress Disorder are that he cannot reintegrate or accept the change--or even "agree to disagree" with the changes. Going to battle with the societal changes of a nation . . . well, guess who loses in the end, which is the basis of the novel's darkness.

There are some good action passages which display Grey at his strongest, most notably one fight scene and descriptions of a snowstorm and of a river in flood. These scenes are too few and far between, though.

If you read The Day of the Beast, it is best to read it as an historic artifact. Grey's use of the term "slacker" is one instance. His description of jazz music from a conservative perspective is another. The presence of prejudice that is common in Grey's novels exists in this novel as in his others but is not primarily racial or ethnic; in this case, rather, it is based on wealth. Ironically, that prejudice is turned upside down with his premise that those who should know better are not showing the wisdom that they should possess by virtue of education and refinement. Those in poverty the author assumes it reasonable to be more base and immoral.

The greatest prejudice is gender-based with Grey's considerations of what women "are" and how they have fallen from that pedestal. This is serious stuff--the role of women in upholding the pillars of society and the role of men in honoring that role of women as the foundational essence of civilization. As usual, though, Grey's application of the abstract to the specific ends in the formation of two-dimensional characters when interesting three-dimensional characters were possible.

Grey lived in and wrote about a time of great change in America, if this can be said without demeaning the great change that takes place in any and every era. In retrospect, Grey did not quite get it right. However, as with all his novels, his assignation of personal responsibility to live life in accord with the highest principles is spot-on. The bad guys are the "slackers," the specific term Grey uses, those who act according to their small desires without regard for their greater selves or for others. Those who are the established social order who allow this to happen are equally to blame in Grey's viewpoint.

Denying personal responsibility because of social complacency is a great sin, according to Grey. We must do right even when the circumstances do not directly touch our lives. When change, though, is the nature of the world and evolution requires that circumstances change, deciding and acting can be tough. Grey's limitation was that he did not see what structures in society needed to change. His vision that was spot-on, though, was that causing others pain and suffering in order to gratify one's personal pleasure is wrong.

Two keys to enjoying Grey's novels are to focus on the selflessness of his protagonists and to accept that he was a writer and not a prophet.  The fact that some writers are prophets provides a perspective for Grey's writing. His vision is true to his time--timeless in some aspects and tragically limited in others. I am tempted to go and read the beginning of Dickens' A Tale of Two Cities. "It was the best of times, it was the worst of times . . ."

The great weakness of this novel is structured in its original intent: "Herein is embodied my tribute to the American men who gave themselves to the service in the great war, and my sleepless and eternal gratitude for what they did for me." Too much tribute, too little novel--or, to put it in another way--Grey focused so much on his "tribute" that he was not successful in truly "embodying" his concept. To me as a writer, if the novel was not enjoyable, it certainly was educational.