Michael Crichton's The Eaters of the Dead and The 13th Warrior, a review of the book and movie 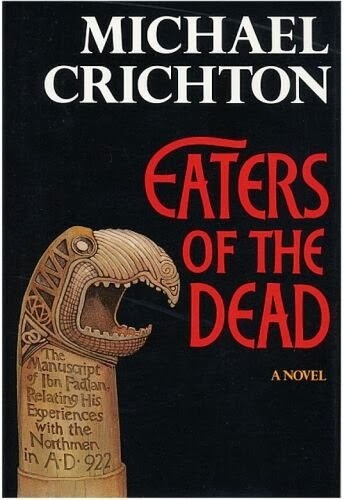 Year's ago I read the book and then watched the movie. This time I did it backwards, the movie, The 13th Warrior, and then the novel, The Eaters of the Dead. It was a better experience the second way around.

When I first read The Eaters of the Dead and then viewed the movie, my experience was that the characterization of the antagonists in the movie did not match well enough how I had imagined the wendol in the novel. The second time around, viewing the movie first, I realized that the archetypal forces that Crichton was utilizing could hardly be matched by movie special effects--the imagination deals with archetypes on too personal a level.

The movie stays close to the novel's storyline, though, and provides excellent visuals of the primeval Nordic forests, the small sailing craft battling the inexorable sea, and the warrior culture of Europe in the 900's. Crichton's novel uses two real sources as a basis or beginning for novel: a narrative of a journey with the Northmen by Ahmad ibn Fadlan and the Anglo-Saxon poem Beowulf. Crichton spices up these stories by spinning the Beowulf monsters to be Neanderthal, so the traveling Islamic ambassador provides an objective account of the epic clash of two cultures and peoples.

The high culture of the Islamic culture is contrasted mightily with the rougher culture of the Vikings. A one-page except of an overview can be read at delanceyplace, entitled "Russians are Vikings." The except is from the non-fiction book Red Fortress.

Both novel and movie provide an excellent sense of a man from a more refined culture entering into and finally accepting and finding acceptance in the Viking warrior culture. At several points in the novel, ibn Fadlan is asked to tell stories. They usually flop or even offend the warriors. Finally, though, as the warriors and ibn Fadlan are heading into the mists to battle the enemy with victory a slim hope, the Persian mentions a saying, that God in His kindness placed death at the end of life, rather than at the beginning.

The warriors laugh, full of the fate of their wyrd before battle, and ibn Fadlan realizes he has finally fit in with his comrades in arms--not just that they have accepted them but that he has finally seen the world as they see it.

Seamus Heaney in the introduction to his translation of Beowulf says that the epic poem's archetypal movement is challenge and battle for one's home, one's land, and finally for one's consciousness. Grendel is the local bully, the troll beneath the bridge. Grendel's dam requires an expansion of the battle outside the hall, and it requires Beowulf to accept greater responsibility than just one battle for glory. The epic poem's last monster, the dragon, arises from the very soil of Beowulf's land. The battle is the purification rite prior to death.

Crichton's novel provides an objective account of the hero's quest of Buliwyf, as the hero is named in The Eaters of the Dead. What we say and do arises from who we are. Crichton once mentioned that he wrote The Eaters of the Dead on a bet that he could tell the story of Beowulf in a manner that wasn't boring.