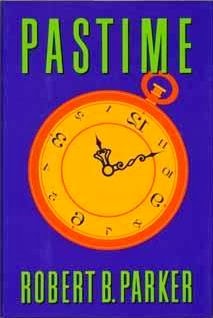 Not only is Pastime one of Robert B. Parker's best novels about the private detective Spenser, but it is also one that clearly demonstrates Parker's skill as a crime writer.


Spenser's semi-adopted son, Paul Giacomin, visits Spenser in Boston asking for his help. He can't locate his mother, who has apparently left on an extended trip without telling him. While Paul's mother is somewhat lacking in motherly skills, he doesn't believe she would voluntarily leave her home for such an extended period without contacting him. Though Paul can't pay Spenser, he takes the case anyway as a favor to Paul. (Wikipedia)

The central plot of finding Giacomin's mother plays out through Spenser's first person narrative, suspense arising from the disappearance of the mother, the arrival of heavy-hitting bad guys, and the usual stumbling around searching for clues that Spenser labels as his professional technique.

Typical to Parker's plot construction, though, Paul Giacomin is seeking answers not just about his mother but also about marriage and relationships. His mother and father's relationship is dysfunctional. Even though Spenser and his partner, Susan Silverman, have a life-long relationship, they are not married, nor do they live together--and Susan is wondering about marriage.

Not just marriage but also the idea of families is explored. One of the bad guys, Joe Broz, is dealing with a son who is an incompetent bad guy who cannot survive in the unforgiving world his father lives in. This dynamic intersects with Spenser's search for Giacomin's mother. Spenser's concept of family, Paul's exploration of family (including his current girlfriend), and Broz's family issues all become intertwined. Adding to this rich stew is Spenser's friend Hawk, a very tough hitman and enforcer--who possibly cannot love yet is involved in events.

What is the ideal relationship? How is loving defined and expressed? These questions become as powerful to the novel as the central quest to locate Giacomin's mother.

In typical Spenser style, it is not enough just to find Giacomin's mother. He wants and needs everything to turn out well--or at least as best it possibly can.

I've just finished reading all of Parker's Spenser novels. The movement of increasing involvement with the characters as the series progresses is truly an achievement for Parker, who passed away (while writing) in 2010. Literature shouldn't just tell a story; it should also inform the reader about life in some way--or at least be accessible to such ruminations. Parker's novel Pastime accomplishes that, providing the reader with the joy of considering significances.