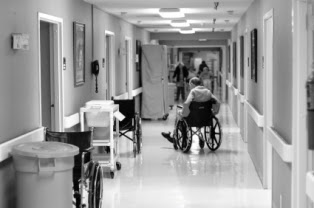 What's going to happen, I thought, when Mom wakes Dad up?

He lies in bed, snoring after his trip to the breakfast room and back. A couple of shakes and "Harold, Harold?" and Dad wakes up, his cap now cockeyed on his head, his eyes slowly focusing.

That leads to train stories for Dad and sets the pace for today's visit. I notice that when I stop talking, Dad's eyes begin to close as he fades back to sleep. Therefore, I have to be lively and entertaining, joking and witty. I sit beside him on the bed that has been lowered close to the floor so that if Dad falls, the possibility of injuries is lessened. He now has an alarm so that if he gets out of bed by himself, the front desk is alerted. He's already fallen twice without injury.

I talk about spring, describing the fresh green of the grass and trees, the bright yellow of California poppies. Dad begins to fade, so I throw in the contrast of Iowa, the trees still bare, the grass still brown, and frost still riming shingles some mornings. Dad begins to fade. I talk bicycles, gardening, then settle on coffee. Dad has two cups, you betchya, for breakfast, and so does Mom, it so happens.

I grab Dad's leg and shake it affectionately a few times. It feels so emaciated--probably both from lack of eating and lack of exercise. Dad was recently in the hospital for a few days because he refused to eat and drink. He was intraveniously hydrated and then sent back to his extended care unit. He has also recently said he doesn't want to engage in physical therapy. "Well, he's tired," Mom says, and I can't argue with that.

But, as Dad was quick to say not so long ago, he's in pretty good shape, considering the shape he's in. He's about two months away from his ninety-fourth birthday.

After about an hour, I tell Dad we're going to go and let him nap. "Glad you came," he says, and he means it.

I'm glad, too. I see the rewards of the last year's efforts. My father and mother are nearing the end of their life cycles, but both are cared for--my dad by a professional care facility, my mother by my brother.

I don't know what tomorrow will bring, but I'm happy. Mom and Dad are safe and--considering the shape they're in--in pretty good shape. That I can take some credit is a source of great satisfaction and relief for me. I think Dad would agree with me: considering the situation I I've been confronted with, I've done a pretty good job confronting it.

Copyright 2014 by Thomas L. Kepler, all rights reserved
Posted by Tom Kepler at 7:00 AM