Another Day Out with Mom #4: Mom and Dad Dancing 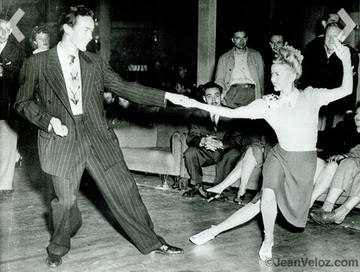 A few times when I was young, I remember Mom and Dad dancing, the big band music swinging and Mom and Dad at one with the beat.

I remember how, hold hands, they would swing back with the beat, away from one another, and then pull and come close again with the beat. A little to the side, a spin, they were elegant while we kids watched, somewhat aghast and somewhat amazed. It was obvious that they had danced together many times and that their bodies were remembering the old times, the old dances, the old sounds. They were smiling slightly, competent and confident in their dance skills.

Dad, I remember, had this look on his face--satisfaction at a job done well, pleasure at how well things were going. In this case, the dancing. He had worn that expression before and would again in the future. It was how his face would settle around the pleasure of listening to a car engine purr its idle after he'd tuned it and adjusted the carburetor. It was the expression he'd assume while before a Little League game he'd do infield warm-up and the team was looking good, scooping up the grounders and firing them to first base. It was Dad's small smile of success.

Mom told me about World War II and how everyone worked together, sharing rides to save gas, helping with the rationing of food and cloth, having a garden in the back yard. Sure, there were conscientious objectors, but even they found ways to help if they could and still honor their principles. There was this sense of unity, Mom said, a willingness to give something up for the greater good that crossed many American boundaries, especially generations--grandparents, parents, and children agreeing on an idea and acting together. It was like a nation dancing to the same tune; toes were sometimes stepped on and some weren't with the beat, but it would be inaccurate to say everyone wasn't in some way caught up by the music.

Out of that war experience came the "modern" era--fragmentation, isolation, cynicism. We stopped dancing together or danced as my generation did, facing one another but not touching. That was the great gift to my parents, that expression on their faces as they danced, that remembrance of the moves they made together, that tactile reassurance that they could swing away and would come back together, on the beat.

I want to say I envy my parents, but that would be too bathetic, proving the idea beyond redemption. My generation--our generation--has to find its own unity, its own common ground, our own music. Then we can dance to the tune we know and remember, our hearts one, that look on our face, a small satisfaction at having done something well.

We are our parents' children, mother and father of our children. Long live the Dance and its swinging beat, a rhythm much like the beating of our hearts. 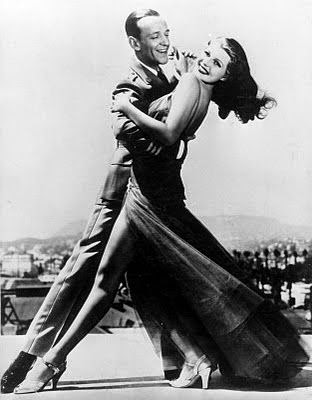