Book Review: The Desert and the Blade 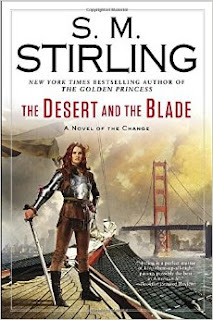 I've read all of S.M. Stirling's Emberverse novels, and The Desert and the Blade is the second of the series that I've awarded a "five-star" rating. The other novel was the first of the series, Dies the Fire.

The Desert and the Blade is a novel where Stirling finally achieves "epic" status in the novel's tone, action, and pacing. A large book, the hardback being 612 pages, the action covers conflict on land and sea. New (or old) cultures are described, some first seen in the recently published short story anthology set in the Emberverse.

The magical realism in this novel, which follows the third generation heroes after the Change, is believable and powerful because of its understatement. The laws of nature have changed, and manipulations can be achieved by those adept--carried out with equal measures of purity of intent and clarity of consciousness (in the case of the protagonists). The evil sorcerers are just plain possessed.

New alliances are formed in this novel between the East and the West, a new quest follows, and there is a satisfactory sense of closure at the end of the novel, even though more novels and adventures will continue. This is a pleasant change from The Golden Princess, which was mostly backfill and set-up for this novel.

I would suggest for those reading this novel to read the anthology The Change, stories written by Stirling and others. Stirling has adopted some of the characters from these stories and incorporated them into this novel to good effect.

Besides Stirling's intrigue and battle action, his description of Generation Three of the Change is especially pleasing to read. It is a new world, folks, and Stirling fills the pages with verisimilitude. Dies the Fire was peopled with real characters from the late 20th century who were dealing with understanding and surviving the Change as best they could, with bravery and intelligence. This novel brings new challenges and mysteries, and its characters use new tools fit for a new world.

Enjoy the journey, and be sure to bring your sunscreen.