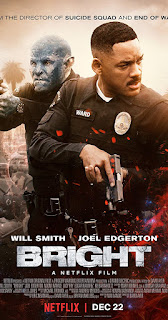 The concept of Netflix's movie Bright really revved my creative juices: a fantasy world like Tolkien's Lord of the Rings but in modern-day times, during the age of men, elves and orcs and men interacting with their guns and cars and cell phones. A great idea! My original review Netflix's Bright, Shiny with Hope, focused on this urban fantasy concept.

However, after another writer that I know commented on my post, saying that Bright was just too violent for her taste, I realized that I have this Netflix habit that I have to consider when reviewing--the habit of backing out of the streaming, skipping scenes, and then continuing with the movie streaming. I did this quite a lot with Bright because there were too many prolonged instances of violence and torture.

What does it mean when I opt out of the flow of the story. It means that I don't like it, essentially and simply. Much of the movie is just one long series of battles the buddy cops engage in, so much that automatically I would say to myself, "OK, a long gun battle. I get it," and then fast-forward to where the scene changes; or I'd realize the protagonists had been captured by the orcs and torture would ensue to garner essential information. Fast forward.

If Netflix continues to feel that excessive violence is the prescription for success, then I feel that the bright hope of their company's future will be tarnished; no matter how lucrative the endeavor, it's just blood money.